Evelyn Sanchez lives in Guatemala’s Diocese of Santa Rosa de Lima. She teaches the children in her village about the Bible and helps them prepare for the sacraments. Evelyn is a woman of great faith who is helping boys and girls love Jesus! We asked Evelyn to tell us the greatest needs in her village. Housing was one of the first things she named.

“There are many people here,” Evelyn shared. “We are many poor people, and our little homes are not in good condition.” 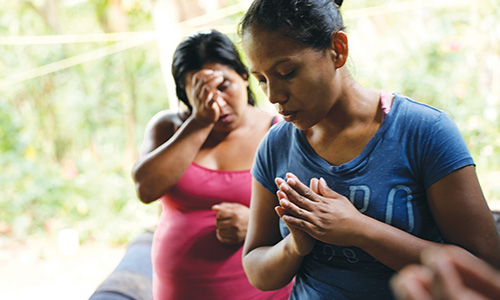 Evelyn Sanchez prays she and her neighbors would “continue to grow in [their] love for the Lord so that [they] can continue to serve him.”

Evelyn prays for God’s help, and she hopes the families in her community will someday have safer, more peaceful homes. She also prays for you, “that God will continue to give you the great, immense heart that you have.”

Our second reading from the Fourth Sunday of Advent comes from Saint Paul’s Letter to the Romans. In the last verse, St. Paul writes, “Grace to you and peace from God our Father and the Lord Jesus Christ.” As you light the candle of peace in your Advent wreath this week, may God fill you with his peace and guide you as you share that peace with others.

Second Reading From the Fourth Sunday of Advent

Paul, a servant of Jesus Christ, called to be an apostle, set apart for the gospel of God, which he promised beforehand through his prophets in the holy scriptures, the gospel concerning his Son, who was descended from David according to the flesh and was declared to be Son of God with power according to the spirit of holiness by resurrection from the dead, Jesus Christ our Lord, through whom we have received grace and apostleship to bring about the obedience of faith among all the Gentiles for the sake of his name, including yourselves who are called to belong to Jesus Christ,

To all God’s beloved in Rome, who are called to be saints: Grace to you and peace from God our Father and the Lord Jesus Christ. 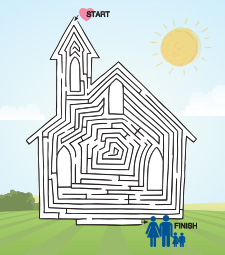 Take Action: Working Through the Church

We can share the love of God with a family in need — and we can do that by working through the Church! Complete the maze and have someone time you.

Set a reward and a time limit (e.g., $5 for completing the puzzle in under 5 minutes). Add the reward to your collection box or donate below.

Life in Christ: Decorate and Solve Your Own Puzzle

To live our best lives, we need certain things — clean water, nutritious food, family and friends, a relationship with Christ, and more. Download the puzzle, print it out and decorate each piece with the things you need to be happy and healthy!

The Catechism of the Catholic Church teaches us that we should have a special love for people who are poor. In the Diocese of Santa Rosa de Lima and the Diocese of Suchitepéquez-Retalhuleu, leaders are working very hard to teach people about God and strengthen the faith of the Church.

We can share our Catholic faith through both words and actions. Like Evelyn, we can tell people about Jesus and teach them his Word. We can also share his love through Works of Mercy by providing the things that poor families don’t have — things like food, water, medicine or, in this case, safe houses.

Our partners in Guatemala are doing wonderful work and leading souls to Christ! By taking part in this mission, you are helping them reach hurting people with God’s love.

*Fact Source: The Catechism of the Catholic Church, No. 2448

2. When you are sad, scared or angry, is there anything that helps bring you peace (or makes you feel better)?

Lord, we thank you for the blessed season of Advent. Thank you for sending your son, Jesus, and thank you for the peace that we can enjoy through him. We pray for families in Guatemala who might feel unsafe or scared. Help us as your Church to share your life-changing peace with them.

We ask that Jesus would be their Prince of Peace today. Amen.