Your Impact in Guatemala

We pray this love story will continue to grow and flourish in the years ahead.

Fr. John and friends, thank you for putting your faith into action by traveling to Guatemala to share the love of Christ with the poor. You have built a unique friendship with families in the Diocese of Santa Rosa de Lima. As an unfolding love story, your compassion and actions are changing lives in both Central America and the United States.

Your impact on the Diocese of Santa Rosa de Lima includes three mission trips. During each, you lifted up the community of faith with hands-on service projects and spiritual formation activities.

Even when the COVID-19 pandemic suspended international mission trips, you continued to bless the people of Guatemala from the United States by hosting food packing events. The men, women and children you served are deeply grateful for your legacy of love.

Thank You for Feeding the Hungry

We’re so thankful for the food packing events you hosted on November 13 and January 8! In November, 500 volunteers helped pack 120,000 meals, and in January, 150,000 meals were packed by over 700 volunteers. All of these valuable meals will be delivered to poor families in the Diocese of Santa Rosa de Lima and other areas in need around the world! 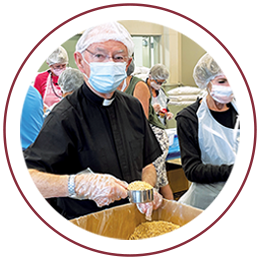 “It was an opportunity to put yourself in the background and put the poor right in front and ask, ‘How do we serve?’”

“It was an opportunity to put yourself in the background and put the poor right in front and ask, ‘How do we serve?’”

We are thankful for Fr. John Barry and the compassionate parishioners at American Martyrs Catholic Church, who continue to minister to the vulnerable in Guatemala. We are looking forward to all that we will do together through these events!

Your compassion for the people of Guatemala is changing countless lives!

You Are Transforming Lives and Touching Hearts

Your ministry to the poor in the Diocese of Santa Rosa de Lima has transformed many lives and touched many hearts. Praise the Lord for your ministry of compassion! Since you began your service in Guatemala, here are just a few of the things you’ve accomplished:

You built a beautiful chapel in the village of La 46.

You funded a new roof for La Concepción’s chapel.

You constructed homes for several families, including Sandra and Faustina, in La 46.

You provided food relief to poor parishioners during the COVID-19 pandemic.

You provided furnishings for Sandra’s house.

The Construction of the Chapel in La 46

Before your support of the new chapel construction in La 46, the people celebrated Mass in a shack without walls and a leaky roof. The new chapel can comfortably seat 200 people and help the Catholics in La 46 live out their faith. This chapel will host Mass, prayer groups, Bible studies and spiritual retreats. God bless you for making a spiritual investment!

The Construction of the Chapel Roof in La Concepción

Because of your generosity, there’s a roof on the chapel of La Concepción! Now 1,266 men, women and children have a dignified place to worship. The villagers are overjoyed by the new roof on the chapel. “Considering the pandemic in which we live, sending that aid to our community is the response of Our Lord Jesus Christ to give us a worthy place where Holy Mass is celebrated,” said Jesús Pantaleon, a member of the community.

Although La 46 desperately wanted a chapel to worship the Lord, the village didn’t own enough land to make the project possible. Then, a single mother named Sandra graciously offered to give up her land and house so the effort could move forward. It was an answer to the parish’s prayer, and all Sandra wanted in return was another plot of land, four posts and a few bags of concrete to rebuild her home.

Since Sandra suffered from various health problems, including leukemia and deep vein thrombosis (DVT) that caused a pulmonary embolism. Because of her health challenges, her doctor told her she could no longer live in a house with dirt floors. She was also caring for three teenage daughters, including Kerly, who has cerebral palsy. It was clear that Sandra needed a better house than the one she gave up for the parish, and that’s why your support was vital.

Thanks to you, Sandra received a new 3-room house with a cement foundation, a waterproof roof, secure doors and windows, and electrical wiring. This was a dream come true for Sandra and her daughters!

Sadly, Sandra recently passed away while undergoing chemotherapy in Guatemala City. Her family is devastated, but they’re pressing on and trusting in the Lord. Your generosity also provided a house for Sandra’s elderly mother, Faustina, and Sandra’s husband and son (both disabled) so that she can also help care for Sandra’s daughters. 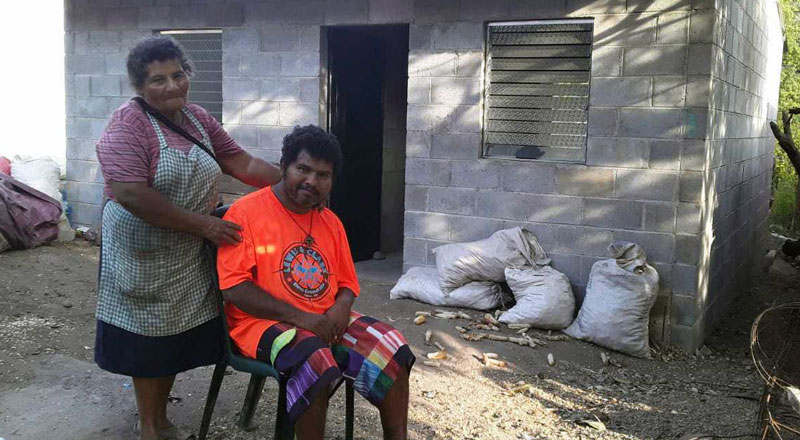 Thanks to your support, Sandra’s mother, Faustina, and her son now live in a beautiful and safe home. 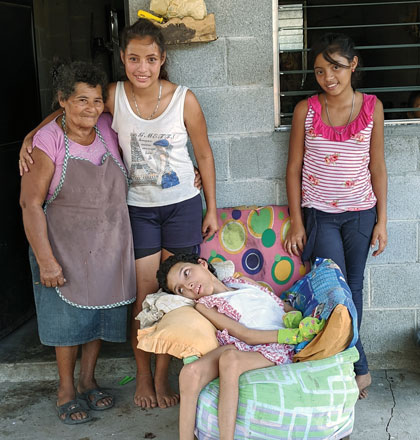 Sandra’s legacy of compassion will live on through her children. Thank you for giving them this wonderful gift!

At Hogar de la Niña Santa Rosa de Lima, a new tile floor was installed in the kitchen, pantry and the children’s dining room. Also, new gutters were installed in the main building, school classrooms area. Most importantly, you invested in the hearts and lives of girls who need positive adult mentors and friends. Thank you for showing compassion!

A big part of Father John’s impact on the Diocese of Santa Rosa de Lima is bringing spiritual refreshment to the people. By celebrating daily Mass in different communities, you brought encouragement to people who usually only get to worship every 4-6 weeks. Thank you for bringing the Eucharist to hundreds of spiritually hungry villagers!

When your friends in Guatemala needed your support to make it through the COVID-19 pandemic, you compassionately provided for Raúl Monterroso’s team to distribute food baskets to 1,112 people throughout the diocese.

One of the families you supported was Ramon and Olimpia Coro and their five children. Ramon is a construction worker, and the pandemic restrictions have made it difficult to find work to feed his children. When the diocese delivered a food basket sponsored by your parish, the Coro family knew God was taking care of them. Thank you for your support!

Thank You for Being the Hands and Feet of Jesus in Guatemala!

Jesus’ commission to carry his love to the ends of the Earth is a serious calling! It sometimes takes sacrificial spirit, courage and perseverance. We’re grateful that you brought all three to the people of Guatemala through compassionate service and generosity.

Fr. John and friends at American Martyrs Catholic Church, your commitments to hosting food packing events and mission trips to benefit poor families did more than address extreme hunger and improve housing conditions. They made an impact on the hearts of each person you encountered and touched with Christ’s love.

May this wonderful love story continue to unfold in the years to come! God bless you!

“Go therefore and make disciples of all nations, baptizing them in the name of the Father and of the Son and of the Holy Spirit.”