One of the most-quoted parts of scripture is the story of the Good Samaritan in Luke 10. Here we are given a picture of what Christ means when he commands us to “love our neighbor” (Luke 10:27).

This story is especially relevant for charities like ours who grapple with the logistics and practicality of meeting the poor’s many needs around the world. We often touch on this topic during our daily staff devotional time. One question that we come back to again and again is this: What does it mean to truly “love one another” (1 John 4:11), and how do we put it into practice?

Just a few days ago, we were reminded of what “loving one another” really looks when we heard this story from one of the ministries we support in Zambia, the Itimpi home-based healthcare program: 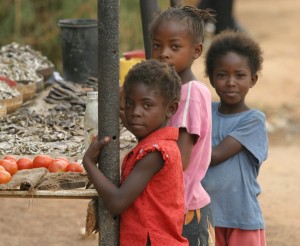 As Carol lay on her deathbed, she had one desire; she wanted to see her beautiful 9-year-old daughter, Ingrid, cared for and educated. Carol soon became another AIDS victim (she had contracted the disease from her husband, who died shortly before her), and Ingrid became another innocent AIDS orphan. Her grandparents, John and Anna, took the child in, but the resources in their overcrowded home were already stretched paper thin. Two of John and Anna’s grown daughters had moved back in after their husbands died, and they were already caring for several of their other orphaned grandchildren. Ingrid’s move to the care of John and Anna was the final blow that brought John to his knees. He came to our mission, his eyes welled up with tears, and told us that he was not able to feed and clothe all the children and his widowed daughters without asking for help. Now with just one more child, much as they loved her, it had become impossible. Thankfully, we were able to reach out to John and his family, our neighbors in Christ. With the support of Cross International, we now give them a monthly stipend in Ingrid’s name to help provide food and necessities for the whole family.