A new home for family of AIDS orphans

Sub-Saharan Africa is more heavily affected by HIV and AIDS than any other region of the world. The reality of this statement hit our Africa project officer, Jim Kline, during his recent trip to visit the projects we support there. He described it this way: “The extent of the AIDS pandemic in Africa is kind of like the genocide in Rwanda. Everyone you talk to has been affected by it in some way. Even if they themselves aren’t affected, they have a neighbor, or relative, or friend who is.”

With AIDS claiming the lives of an estimated 1.5 million people in the region, more than 11 million AIDS orphans have been left to fend for themselves.

We support several programs in Africa to help AIDS orphans, providing everything from housing and food to Christian counseling. Below is a hopeful story brought back from Jim’s recent trip that illustrates the impact one of these programs is having on the lives of AIDS orphans: 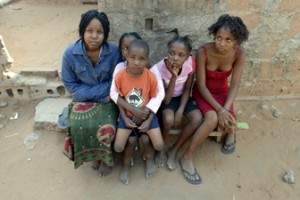 (Left to right) Saquina, 17, Anicha, 9, Miro, 5, Rosa, 13, Guinalia, 15, and Iranio, 18, (not pictured) were left alone and utterly destitute when their mother died of AIDS two years ago. Here they are just weeks after their mother’s death sitting in front of the crumbling shack where they used to live.

The six Borjes children have known much pain and hardship. In 2001, their father was murdered in front of their home by a drunken soldier, leaving their mother to support the family alone. They were already quite poor, but without their father their life got much harder. Then their mother became ill. She frequently went to a witchdoctor for a cure, but she only got worse and eventually died of AIDS in September 2007.

Left to care for themselves, the siblings, ages 5 to 18 at the time, struggled to survive without an income. One of the older girls turned to prostitution to make a little money for food. Soon after that our mission partner, Reencontro, a Catholic ministry that helps AIDS orphans in Maputo, Mozambique, began giving them food, which helped — but the family desperately needed a new place to live. The leaky, crumbling cement shell of a structure they lived in was on the verge of collapsing.

In 2008, the Borjes children finally received some good news. They were being moved into a home built with funds from our generous donors. Working through Reencontro’s orphan aid program, we have been able to continue to support these children. They now receive a $200 stipend each month for food and living necessities. Three caregivers from the community, hired by Reencontro, visit the children frequently to make sure they are doing okay. For the first time in a long time, the Borjes children have hope.

Click here to learn more about the work we do with Reencontro and AIDS orphans in Mozambique. 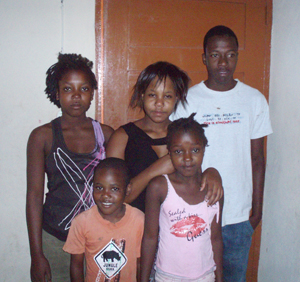 The Borjes children, now ages 7 to 20, stand in front of their new home built through the gifts of our benevolent Catholic donors.