Claudio, one of our project officers, just got back from Peru last week, and apparently it was an unusual trip — unusual because transportation workers went on strike shortly after he arrived in Lima. Public transportation came to a halt, and protesters were hurling rocks at cars, which made it quite nerve-wracking for Claudio to drive from project to project. He was able to do it without incident, but most people were not willing to take the risk. Instead, people stayed home from work and school, and things pretty much shut down. So when Claudio ventured to visit a Cross Catholic-funded feeding program, for example, hardly anyone else was there!

This happened consistently when he arrived at various project sites around Lima, except for one: Solidarity in Action Clinic, where the strike seemed to have the opposite effect. This is a neighborhood clinic located in a very poor community. 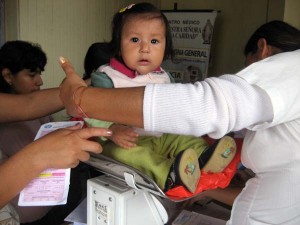 Since it’s largely subsidized by Cross Catholic, it can charge very affordable rates. Anyway, when people want to go to this clinic, they just walk a short ways down a dusty road. No need to battle city traffic (or protesters). So that day, since people couldn’t travel to work, and couldn’t send their kids to school, they took advantage of the time off to take their children for a check-up!

Solidarity in Action Clinic is a great Catholic ministry to the poor there. Before it opened, mothers rarely got prenatal care, so childbirth complications were common; and no one saw a doctor unless they were really, really sick — and even then they had to beg for treatment because they couldn’t afford it. Now, mothers get prenatal care, babies are born healthy, child development is closely monitored, and sick people get treatment for illnesses before they’re too far-gone. The clinic has truly improved life for people in this neighborhood. Click here to learn more about Solidarity in Action Clinic.