Would you believe the patron saint of priests was a man of average intelligence who struggled with his Latin studies, failed his pre-seminary exam, and was sent home from school and told never to return?

Recently, during morning devotions, our staff talked about the life of St. Jean-Marie Vianney, in honor of his feast day as well as the 150th anniversary of his death. Never heard of him? You’re not alone. But St. Jean-Marie’s story is especially significant right now, as it highlights the theme of the “Year for Priests” that Pope Bendict XVI declared for the period of June 19, 2009 to June 19, 2010.

It turns out that St. Jean-Marie’s claim to fame was not his intellectual prowess or eloquence, but his humble spirit, his dedication to hearing confessions, and his charity toward orphans, the sick, and the poor. He brought Christ to hungry souls by living as Christ lived, with purity and compassion. 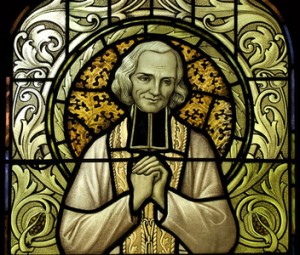 St. Jean-Marie Vianney was known for his charity toward orphans, the sick, and the poor.

It’s easy to feel intimidated by the enormous responsibility of caring for the world’s poor. But the life of St. Jean-Marie reminds us that God doesn’t need super-humans, just humans with a servant’s heart. They are people like Sr. Angela, the 80-year-old, wheelchair-bound nun who refuses to let her partial paralysis get in the way of helping poor young Guyanese women at St. Bernadette’s Hostel. Or Fr. Glenn Meaux, a Louisiana native who chose to move to Haiti and start the Kobonal Haiti Mission to uplift some of the poorest people in the western hemisphere. Whatever their talents, whatever their resources, they answered the call, and God honors their obedience.

We at Cross Catholic rely on God to do incredible things through us that we could never achieve on our own. After all, Christ promised the earth to the meek, not the scholar with the largest IQ. He promised the kingdom of heaven to the poor in spirit, not the billionaire Wall Street mogul. The Jewish fishermen who spread Christ’s name to the ends of the Roman Empire showed the world the awesome truth that God is glorified in our weakness.