Hope in the Storm

We reached out to several of our ministry partners in the Philippines and Vietnam over the last few days to see if they were OK after the devastating floods caused by Tropical Storm Ketsana. So far, we’ve only heard back from one of them — please continue to pray.

On Saturday (Sept. 26), Tropical Storm Ketsana barreled into the Philippines, dropping the heaviest rain the country has seen in decades. Massive floods quickly engulfed the capital city of Manila and the surrounding areas, claiming the lives of at least 284 people and leaving nearly 400,000 displaced. Local officials say the death toll from flooding in the Philippines continues to rise as the strengthened storm, now Typhoon Ketsana, moved on to slam into central Vietnam today (Tuesday), killing at least 23 Vietnamese.

This morning we received an email from Sr. Irene, who runs the Marie Louis Trichet Learning Center, a school for handicapped children we support in Manila. Though she admits that the floods have been devastating, she offers words of hope for the school and her country’s recovery:

My dear brothers and sisters,
Thanks for your concern. This typhoon is really a tragedy. All schools are closed for the week. People still have water in their house waist deep. Many of our parents have nothing left. What they have salvaged they are trying to dry in the sun, but another typhoon is expected in the next few days. But you know the people here they are very resilient and say, “At least our kids are alive.”

In front of our house the water was knee deep and in front of the school the fish were trying to get an education. There was a wedding in our small chapel on Saturday. The groom was there, but the bride never showed up. She was stranded in Pasig.

The casualties are up to 150 dead but many are still missing, mostly children who could not fight the current when the rivers were overflowing and the dams opened. In Cainta Rizal, all six kids from the same family died in a landslide. The people from U.S. Embassy are really doing a lot and want to help our kids also with rice and especially bottled water. You can just try to imagine what the place looks like with the garbage everywhere, the rats and what not. Lucky the government is responding quite well, and Malacanan was turned into an emergency center.

Despite the devastation, we know God is in control and we will recover.

Continue to pray for the people of the Philippines and Vietnam, and say special prayers for Sr. Irene and our other ministry partners working so diligently to help the storm-devastated people. 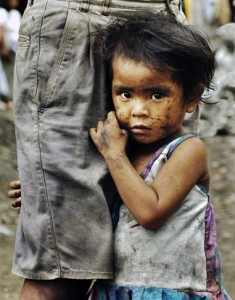 At least 400,000 people from Manila and the surrounding provinces have been displaced by Tropical Storm Ketsana’s flood waters. 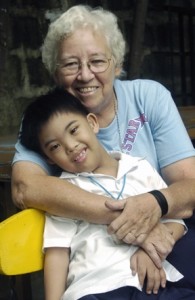