Poverty is more than just an economic issue. Take, for instance, 11-year-old Caroline and her two older sisters, Jovias and Scovia. The three Ugandan siblings lived alone in the crumbling ruins of a once-decent house built by their father, whose alcoholism has led to much grief for the whole family.

In 2003, the girls’ parents separated, leaving them in the care of their father. Then the father married another woman and moved in with her, leaving the girls to mostly fend for themselves and depend on their grandparents who live nearby.

Eventually, the two older girls were discovered by the local Catholic diocese, which rescued them from their bad situation by enrolling them in a local boarding school. However, the girls would often cry, and were not adjusting to their new life, and even began running away. 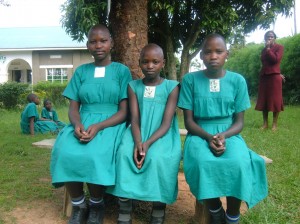 Later, it was found that the girls had run away to check on Caroline. They were worried about their little sister, who remained at home without adequate food or protection.

The diocese solved the problem by allowing Caroline to attend the boarding school with her sisters. Now all three girls are getting a good education, nutritious daily meals, and lots of adult supervision and love, plus therapy from trained counselors to help them cope with their emotional scars. The girls now have smiles on their faces and enjoy being at school.

Cross Catholic is providing the funds for Caroline, her sisters, and other poor Ugandan children to attend Catholic boarding schools, where they are well taken care of and provided with all the resources they need to excel in their studies and prepare for future careers.

CLICK HERE to find out how you can help us bring positive change into a Ugandan child’s life.