Deborah, one of our staff members who usually works at a desk in our Florida headquarters, recently went to Haiti for the first time to see some projects we support in a remote village. Here are some of her raw reflections from day one:

When you have no electricity, you go to bed with the sun and get up with the sun.  As a matter of fact, I am writing this in the dark and hope I can read it in the light of day.

I have more in my backpack than most have in their homes—including food. I didn’t see any stores of food in any homes I visited. In fact, I didn’t see plates or cups or pots to cook with in many of the homes.  Even the animals looked hungry—you could see the ribs on the dogs and livestock. 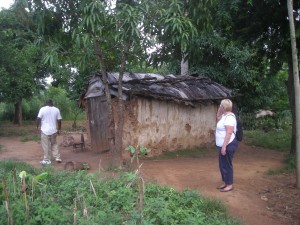 We visited an elderly man who had cut his leg while using a hoe in his garden. It was a classic example of how even simple things like a cut affect the lives of the poor. The cut was near his ankle. His leg, foot, and toes were swollen. We asked him to remove the rag he used to wrap the cut. When he did there was a leaf covering the cut. The cut was oozing puss. He told us it hurt so bad he couldn’t sleep the night before. We told him to elevate his leg and moved a chair closer to him to show him. We sent back band aids that had antibiotic ointment on them that I had brought, and some hydrogen peroxide. You and I, we would have those things in our First Aid kit and never would have needed a leaf to cover a cut. I sent a Power Bar back for him to eat.  And while that would not cure his undernourished body or his cut, surely the 23g of protein could fill his belly for today.  I hope he could sleep last night.

On a good note, I learned he is getting a house through a project we support in Central Haiti. It will be a thousand-percent improvement over the crumbling mud house he lives in now.