Still reeling from the damage and flooding caused by Tropical Storm Ketsana just days ago, our partners in the Philippines are bracing for another destructive storm. Super Typhoon Parma (called Pepeng locally) is expected to bring heavy rainfall and major property damage to the Philippines on Saturday, according to meteorologists.

At least 284 people in the Philippines were killed by the first storm, which strengthened into a typhoon and barreled into Vietnam Wednesday, killing at least 74 people. Both countries are struggling to recover with hundreds of thousands displaced by the floodwaters.

We are responding to this desperate situation by offering emergency funds to our mission partners in the field for disaster relief.

Over the last several days we have been in touch with some of our partners in the Philippines and Vietnam. Some of them have sustained heavy damage. They say the people’s greatest needs right now are food and clean water. They are holding on, but they need our help — especially with the super typhoon closing in. 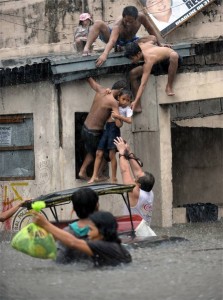 A boy is lifted onto the roof of a building to escape the flooding in the Quezon City suburban of Manila.

One of our partners in Manila emailed us today describing the need:

It is by God’s grace that we are spared and still able to minister to the people. Some of people were badly affected by the previous typhoon and there is still a lot of relief work that needs to be done. Please continue to pray for the Philippines as we are preparing for two more typhoons coming our way. Thanks.

Please continue to pray for the safety of those in the Philippines and Vietnam as Super Typhoon Parma approaches, and join us in providing emergency disaster relief to our partners there.