New news: The scholar, Liu Peng, is getting publicity for his cause in China Daily, the official government English language newspaper of China. How’s that for a twist!

Liu Peng’s freedom to promote legal reforms in a government newspaper is being interpreted by observers as a sign that Chinese officials want to build a better relationship with unsanctioned religious groups, including the Protestant house-church movement as well as “underground” Catholics, who comprise about two-thirds of all Chinese Catholics.

Earlier this year, Chinese Premier Wen Jiabao extended an olive branch to religious-minded citizens when he announced the government’s intention to “enable religious figures and people with religious beliefs to play a positive role in promoting economic and social development.” 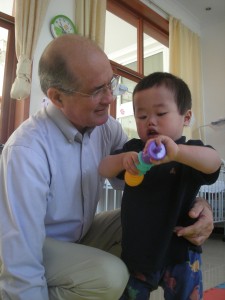 The impact of Catholic social services in Chinese society has no doubt played a role in weakening the walls of distrust between the Church and the government. That should be an encouragement to our Cross Catholic ministry partners in China, as they go about the business of rescuing the country’s most vulnerable children from abandonment and death.

Without Catholic agencies such as China Little Flower in Beijing, the government hospitals and orphanages would not know what to do with the many premature babies and critically-ill or disabled children who are left there by parents. China’s one-child population control policy has had an unintended side-effect of encouraging families to abandon special-needs children. This in turn has created a need for Catholics to step in and do the work that no one else wants to. Many times, this means simply loving a child and being there for them during the final days of their very brief lives.

God’s call to defend the orphan is as relevant today as it was when the Bible was written!