As we move into the New Year, media outlets have been a buzz with forecasts about the U.S. housing market in 2010. One Wall Street Journal article proclaimed that the future was “uncertain” with things unlikely to recover much this year.

But the U.S. housing market isn’t the only one suffering. Worldwide — mainly in developing countries — more than 1 billion people currently lack adequate housing, while about 100 million are homeless. And these aren’t just faceless numbers. These are orphans, single mothers, widows, and destitute families struggling to survive from day to day.

Tesfesseha Tesfay was one of them. She lived in a tent in Tigray, Ethiopia with her 12-year-old daughter and 8-year-old twin sons for nearly two years. More of an old tarp supported by sticks and held together with rope, the tent leaked when it rained and did little to keep out the ice-cold mountain air at night. 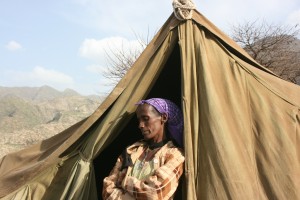 Before she was provided a sturdy home through Cross Catholic, Tesfesseha and her children weathered the cold nights in this makeshift tent.

“I live here because there is nothing else I can do — I don’t consider it living,” said Tesfesseha, who had to leave her home in town because the rent was too expensive. Her husband cannot support them because he is very ill and lives with a relative in another town. Tesfesseha is also often too ill to work; she’s never fully recovered from a surgery she had after a miscarriage. The local Catholic church would sometimes give her money for food, but her family often went without.

Tesfesseha was one of several women to receive a new house through the housing program we support in Northern Ethiopia. When Tesfesseha found out she would be getting a house with sturdy cement-block walls, she exclaimed, “I cannot express my joy. This will make a big difference in our lives.”

We may not be able to fix the housing crisis worldwide, but we can ensure that poor families like Tesfesseha’s have a safe place to rest their heads at night. Click here to learn more about our housing projects.