Our Haiti Projects Officer Mike Henry was in our office in Port-au-Prince during the massive earthquake that shook Haiti Tuesday. Below is his first-hand account of the quake and the destruction it left behind:

It started off as kind of soft shaking then really intensified. There was no way I could have gotten out of the building. It was shaking too hard. I stood in a doorway to try and protect myself. Everything that was standing fell over. Computers fell off desks and pipes burst everywhere.

Once the earthquake stopped, I ran to the window that looks down over the city. It’s usually a nice view. This time it wasn’t so nice. A huge cloud of dust and smoke hung over the city. I have never seen anything like it in my life. There was screaming, crying, yelling and sheer panic coming from the city. Many of our neighbors’ houses collapsed.  About every other house had gone down the hill. They literally just fell off the mountain. It was quickly getting dark outside — it was really scary. Yelling and crying was coming from every direction.

A few hours after the earthquake, I left our office compound and ventured into the streets to assess the damage. That’s when I realized the extent of the destruction. The streets were a maze of rubble and broken houses. They stretched in every direction. All the roads were littered with debris. Hundreds of people were stumbling around in the dark, stunned and begging for help. Most of the houses around our office had totally collapsed.

A bit later, I went with two guys from the U.S. Embassy to check on the road to see if we could get some of the critically-injured people to a medical outpost. We had only gone about 200 to 300 yards down the street when a woman came running toward us, screaming, “Please, come help me. My daughter is stuck — my baby is trapped. Please, you have to help me!”

We followed the woman, and about every 10 steps another person came up to us, asking for help to get trapped people out of the rubble. We freed one woman on the way, but there wasn’t much we could do for anyone because we didn’t have the tools to get them out. I felt so helpless. I hated having to leave them behind, knowing it would be a while until help would come. Those people are still stuck in that rubble, probably in dire need of water and air.

As I sat in the compound later, feeling helpless and overwhelmed, I heard people in the streets singing and praising God. It really touched me. The people’s faith is all they have. It is more real to them than anything around them. Their homes are gone, their children are gone; all that they have is their faith.

Mike is working with our partners in the country to channel our aid to those who need it most. The need is still very desperate. Click here to see how you can help, and please continue to pray for the people of Haiti.

To listen to an audio recording of Mike sharing his story, visit our disaster relief website. Also, see photos he took just hours after the earthquake here. 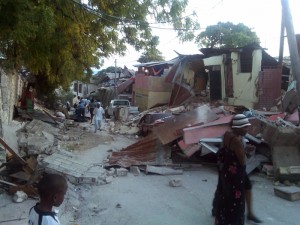