If you’ve ever wondered where the most religious place on earth is, a new study from the Pew Forum on Religion and Public Life has an answer: sub-Saharan Africa. More specifically, the countries south of the Sahara Desert and north of South Africa.

Researchers found that a large majority of Africans consider religion “very important.” But the more interesting find has to do with which religions they are practicing. Just a century ago, traditional indigenous beliefs dominated the region. But Christian missionaries, both Catholic and Protestant, have turned the tables to the point that one in five of the world’s Christians now lives in sub-Saharan Africa!

This reversal is great testimony to the effectiveness of evangelism, but it’s not the whole story. In many cases, indigenous African beliefs, such as sacrifices to ancestors, have been incorporated into their newfound Christianity. A man might go to Mass on Sunday and then on Monday earn a living as a witch doctor. And as the infamous Rwanda genocide has shown, the tribal violence that plagued pre-evangelized Africa continues to be a problem. 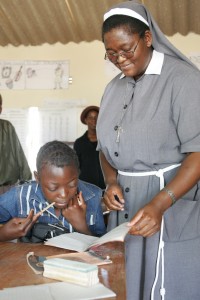 The sisters at Kabulonga Cheshire Home are impacting African society with Catholic moral values and the love of Christ.

How should we as Catholics respond to this? Deep, sincere faith cannot be forced, but God has given us the tools to be an effective witness, and one of those tools is the simple act of loving our neighbors. That’s what is happening at Kabulonga Cheshire Home in Zambia, where the Franciscan Missionary Sisters of Assisi are providing care for children with birth defects and physical disabilities. The love and compassion the children experience is in stark contrast to their previous lives of loneliness and isolation in a country where disabilities carry a heavy stigma. Now the children do not have to be ashamed, and they have learned that there is a God in heaven who accepts them the way they are.

Cross International is an enthusiastic partner and supporter of Kabulonga Cheshire Home. Click here to find out how you can help the sisters impact Africa with Christ’s love.