A plate of bones

This week, Cross Catholic was visited by Nathalie Amyotte from the Espwa orphanage in Haiti. She shared a personal story that painted a vivid picture of Haitian poverty and the importance of Espwa’s work.

One night, as Nathalie was getting something to eat, she saw children on the street begging for food. They were calling to her by name, because she often would help them. But this time, something was different.

“There was one child who was apart from them and he wasn’t begging and he wasn’t asking for anything,” Nathalie said. The boy was holding a plate of old chicken bones, and she realized he had collected them because he had nothing else to eat. Suddenly, another child bumped into the plate and knocked it over, scattering the bones across the ground. The boy raised his voice and cried as if grief-stricken. 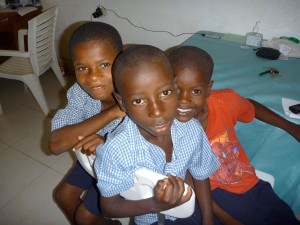 Jamesley (center) and two of his brothers getting a physical at the Espwa orphanage.

“His cry will stay with me my whole lifetime. It haunts me. Because his little chicken bones had been thrown to the ground and that is the only meal he was going to have that day,” Nathalie said. “I went to see him because I heard this cry. He was trying to wipe the dirt off his little chicken bones. And I said, ‘No, no – let’s go eat.’”

After feeding the boy, whose name was Jamesley, Nathalie visited his home. She learned that his mother was pregnant with her eighth child and about to get kicked out of her home. Nathalie rushed to orphanage and told her colleagues that there was a family that needed help. Without a second thought, Espwa leadership said, “Let’s go.”

They gave Jamesley’s family money for food, paid for a year’s rent so they wouldn’t be kicked out, and welcomed Jamesley and his brother into the orphanage.

Nathalie told us, “They’re going to school. They eat three times a day and he is thriving. I said to the leadership team, ‘I love that you didn’t even question it. You just said, let’s go.’ They said, ‘But that’s why we’re here.’”

That’s also why Cross Catholic is there – to reach out to children like Jamesley and save them from despair.