The will to learn

Some kids will invent almost any excuse to stay home from school. But 10-year-old Bruce Mwansa has a legitimate reason for his imperfect attendance. In fact, no one would blame him if he didn’t show up at all.

At home, Bruce’s only parental figure is his blind, elderly grandfather. His grandmother is dead, his father ran off long ago, and his mother has been incapable of taking care of her ten children since she succumbed to mental illness. The house is empty and dilapidated, and the garden has become a dried out field of dirt. They are so poor that they eat only one meal a day, which they get by begging in the streets.

That’s why Bruce misses so much school – his family needs him to beg. But despite the hardships of his home life, he still manages to attend class twice a week, so he can be with his friends and get an education that many others do not have. 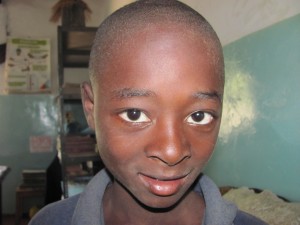 Bruce Mwansa, 10, would not be able to go to school without the help of Cross Catholic.

In the poorest parts of Zambia, it’s not uncommon for children to opt out of school altogether. But those who do go are there because they want to be, and they are willing to walk several miles each morning to get there, because they know how important an education is to their future.

Unlike Zambia’s public schools, enrollment at Bruce’s school is one hundred percent free and includes all supplies. Cross Catholic provides the small salaries of the teachers, so they don’t have to pass on the cost to the students, who have nothing to give. The school is the children’s only hope of escaping squalor and hunger and achieving better lives. 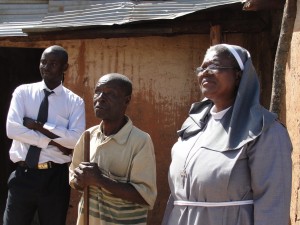 Bruce’s blind grandfather (center) expressed his thanks to Cross Catholic for helping the motivated young boy get the education he desires.