Right now, people in Haiti are busy clearing away rubble from the January earthquake in trucks and wheelbarrows. There’s much work to be done, but Port-au-Prince and the surrounding towns are slowly putting buildings, shops, and homes back together. Yet underneath the surface lies things that are still broken and will take years to heal, like the hearts of the survivors who’ve lost so much.

The stories of loss coming from Haiti are heartbreaking and almost too much to bear. People like Caline Brevil, 23, are struggling to deal with the emotional scars left by the disaster. Caline, who was nine months pregnant at the time of the earthquake, spoke of her horrifying walk back to her house immediately after the quake. She said that the closer she got to her house, the more bodies there were in the streets. Caline had to step over and on top of bodies on that walk. She would turn around and say “Excuse me” to the people she stepped on, only to realize they were dead.

When she arrived at what was once her house, all she could see was the roof—that was the new floor. The damage was so severe in her neighborhood that there was no one left alive to ask where her husband and twin 5-year-old daughters were. Caline never found them that day. 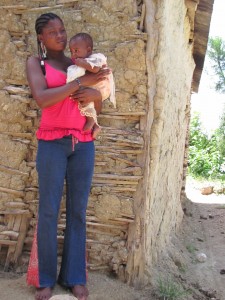 Caline Brevil and her 7-month-old daughter, Ronese, are just a few of the many earthquake survivors in Haiti who need our help.

Three days after the earthquake, Caline gave birth to a baby girl, who she named Ronese. She begged a ride to Kobonal, Haiti, a remote mountain village where she grew up, and she now lives with her grandmother in a crowded mud-walled home. Caline has nightmares often and she can’t sleep at night—she will jolt awake and feel as if the bed is shaking. She also has a recurring dream that she and her husband are together and the earthquake hits. In the dream, he carries their twin daughters and they all begin running. They come to the fork in the road, and Caline goes one way and her husband and children another.

Click here to find out how Cross Catholic is reaching out to earthquake survivors like Caline—and how you can make a difference!