In the midst of despair people around the world have been touched by the faith and resilience of the Haitian people in the months following the devastating earthquake that leveled Port-au-Prince on Jan. 12, killing thousands and leaving more than 1 million people homeless. 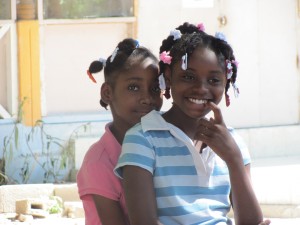 “While walking amid the ruins of Port-au-Prince, I came across a spontaneous outdoor gathering of Haitian believers who had just watched their whole world crumble, now joined together in prayer and worship. The earthquake could take their homes and churches, but it could not take their faith! I was amazed by the joy, gratefulness, and prayerful resolve these Haitians were showing in the face of such devastation.”

And this wasn’t an isolated incident. NPR did a piece last week in honor of the six-month anniversary of the earthquake that touched on that very subject. A group of doctors shared an inspiring moment they experienced in the midst of tragedy and pain, at a makeshift tent hospital in Port-au-Prince. This happened to be there very same tent hospital that Cross Catholic supported with tents, medicines, and other aid after the quake.

In the piece, the doctors explain what happened: “…a man begins to play a guitar in the corner of the tent, and patients begin to sing.  Soon every Haitian in the tent is singing or clapping or dancing.  The song: “Jesus, thank you for loving us.” (Click here to listen to the full audio segment.)

These doctors were overwhelmed by the experience. As one put it: “It’s extremely humbling to be around a people that, in the worst time of their life, have it in their hearts to give gratitude for what they have left…”

This is reminiscent of the story of Paul and Silas praising and singing hymns to God despite being chained and in prison (Acts 16:25-31). And if you recall, through their worship the jailer came to Christ. Like this story, the Haitian people’s hopeful attitude despite the devastation caused by the quake is an amazing testament to the awesome power of God to overcome any circumstance.

Click here to learn more about what Cross Catholic has been doing in the last six months to help earthquake victims in Haiti.