After more than two years of waiting and praying, Ana Briceño’s dreams came true. Her family was one of 50 to receive a sturdy home through a housing project we support in Nicaragua.

“This is such a blessing from God,” Ana said. “Before our family was suffering because we were constantly moving from place to place. We did not have a place to live.”

Ana and her husband, Erwin, and their five young children had been nomads for several years. The $2.50 a day Erwin made working on a shrimp farm was hardly adequate for food and basic living necessities, let alone enough to secure a safe place for them to live. So they moved — a lot. 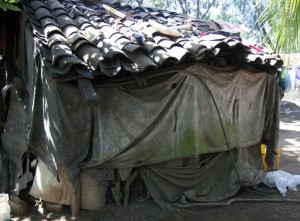 The shanty where Ana and her family used to live was literally falling apart.

One of the places they lived was a small shack in El Limonal, the community next to the Chinandega city garbage dump. The people call the area the Triangle of Death because it is surrounded by the 20-acre dump, an overflowing cemetery, and a contaminated river. The nickname is hardly an exaggeration. Disease runs rampant in the community because of the filthy living and working conditions.

Ana’s children were always sick from the dirty conditions — they lived in a dilapidated shack made from rusted tin, dirty plastic tarps, and rotting wood — and she feared something would happen to them while she was gone during the day working as a maid.

Ana prayed daily that her family would be able to escape the harsh conditions of the dump. Just when she was about to lose hope, Ana’s family was selected to receive a house in a clean community miles from the dump through a Cross Catholic housing program. 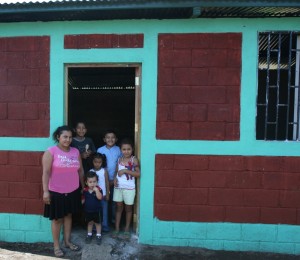 Now Ana’s family can sleep in peace knowing that their sturdy house built by Cross Catholic will protect them from the weather.

Ana and her family are now settling into their new house, and her three oldest children are attending the primary school in their new community — the other two will also once they are old enough.

“The environment here is much better than in the dump,” Ana said. “I am so thankful to have a place where my children can grow up in safety.”

Of all the things you can do to help a poor family nothing is as transformative as building them a house. Not only does it provide them with a safe place to live, but it gives families who have nothing hope for a better future while showing them the love of Christ in the process. Cross Catholic provides sturdy homes to destitute families like Ana’s who don’t have a safe place to call home. Click here to learn more about the housing projects we support around the world.