Cross International Catholic Outreach may be listed among the Chronicle of Philanthropy’s Top 100, but we’re still a pretty small fish in the ocean of humanitarian orgs. So when we landed a $4.8 million grant in late ‘08 from a whale—the US government—to help fund an AIDS project in Haiti, we did a happy dance. Frankly, it was our first government grant.

Some of the ‘big fish’ finance a huge chunk of their work with government grants; but Cross Catholic mainly relies on private donations. We probably always will. Nevertheless, this guv-funded project is a big deal to us. By the way, we call it the “PEPFAR” grant, an acronym for the program that awarded it: the President’s Emergency Plan for AIDS Relief. 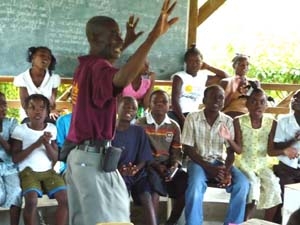 The PEPFAR project’s AIDS-prevention message is getting delivered to schools and church youth groups throughout Haiti.

To describe the project in a nutshell: We’ve got several ministry partners in different parts of Haiti we’ve been supporting for years. Most of them focus on either kids, or medical care, or both. With this grant we’re able to help these partners combine their knowledge and resources, and roll out a comprehensive AIDS-prevention program to their respective communities—which, since the earthquake has included IDP camps. As a result, they’ve been able to help more people together than they ever would have separately.

Now we’re nearing the end of year 2 of the 3-year AIDS project, and it’s exciting to look back and see what’s been accomplished.

For example, more than 3,200 people have been trained to promote AIDS prevention. Most of them are youths who teach other youths, or “Peer Educators.” Well, they’ve turned around and reached more than 17,600 people with their message. A good portion of those were schools and church youth groups. In fact, some of the youths enjoyed the presentation so much they volunteered to become Peer Educators too!

At this rate, the youths of Haiti will know what they need to do (and not do) to prevent AIDS. And their generation won’t shun others who have it.

In addition to spreading the prevention message through this project, thousands of people, including pregnant mothers, have been tested and counseled. Those who tested positive have been started on treatments so they can live long enough, and strong enough, to raise their children. That’s keeping down the count of AIDS orphans. Plus, more than 10,000 orphaned and vulnerable children have received supplemental services such as food and medical care.

In a year or so we’ll be able to look back and see the exponential impact of the completed project. Looking forward to it!