Just nine months after a massive earthquake devastated Haiti, the country is facing another deadly challenge. In the last week, more than 250 people have died from a deadly outbreak of cholera and more than 3,300 have been infected.

Haitian and global health authorities fear that the highly-contagious waterborne disease could spread to the more than 1 million earthquake refugees still living in tents and makeshift homes across the country.

We are working with our partners in Haiti to get much-needed medical supplies to clinics and hospitals in time to keep the outbreak from turning into an epidemic. Soon after the outbreak, an emergency assessment team from Cross International Catholic Outreach rushed to the rural Artibonite Valley, the source of the outbreak. The area is a temporary home to thousands of Haitians who were displaced by the earthquake back in January. 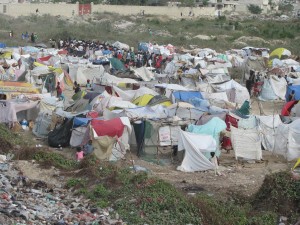 Health authorities fear that Haiti’s recent cholera outbreak could spread because of poor sanitation to the earthquake refugee camps scattered across the country.

Earthquake refugee camps are prime spots for the spread of the disease because of poor sanitation and unhygienic living conditions. Cholera, a bacterial infection, is spread through contaminated water. It causes severe diarrhea and vomiting that can lead to dehydration and death within hours.

Our team went first to St. Nicholas Hospital, which received large shipments of medicine and medical supplies from Cross Catholic for earthquake relief earlier this year. Hundreds of sick people have flocked to the hospital since the cholera outbreak. After providing some supplies, the Cross Catholic team pushed on to a small health clinic — Sant de Sante de Drouin — in an area that international aide workers had not yet reached.

In a recent email, our Haiti projects officer, Mike Henry, explained the situation:

“When the Cross Catholic team arrived at the clinic, they found two Cuban doctors and a very limited medical staff caring for hundreds of people…Seventy-six people had had already died. The team worked valiantly to help the clinic staff.” 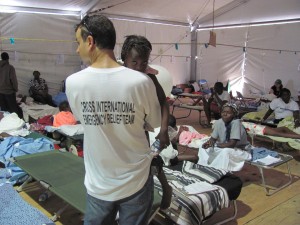 An emergency assessment team from Cross Catholic has already visited the site of the outbreak. We are coordinating with ministry partners to bring medical supplies to clinics and hospitals in the area.

The next day we received word that four students at a school we support nearby the site of the outbreak had died.

Despite the seriousness of the outbreak and fears that it may spread to other areas of the already-battered country, our hearts were lifted by the words of one of our ministry partners in Haiti:

“The people of Haiti seem to be facing this newest challenge, cholera, with their usual strength, and a full determination to plow ahead.”

Please continue to keep the poor people of Haiti in your prayers. This situation emphasizes why we must continue to help Haiti, even months after the earthquake. The need is still great, and without adequate housing, sanitation, and access to clean water, the people will continue to suffer tragedies like this.