For Mona Deval, the Haiti earthquake didn’t end with the last tremor, but with a question mark. She tells how she searched among the corpses at the hospital; checking every bruised and lifeless face; fearing one would be her husband. Never finding him.

“I lost the most important part of my life…I see him when I close my eyes…He was always there for me,” says the 32-year-old widow, who also lost her home, her boutique business, and all her possessions. Mona was forced to survive on nothing but a little bread and sugar water for three days, until her father rescued her and her two sons and brought them to the rural village of Kobonal.

With help from the Catholic mission in Kobonal, Mona and her sons were able to get the food and basic supplies they needed as they began to pick up the pieces of their lives. Crammed into a small house with nine other people, the Deval family has been selected by the mission as a candidate to receive a sturdy new home – a simple, cement structure along with a half acre of farmland, plus tools, seeds, and agricultural training. Mona’s sons were integrated into the local school, where they have enjoyed making new friends while they heal from their grief. 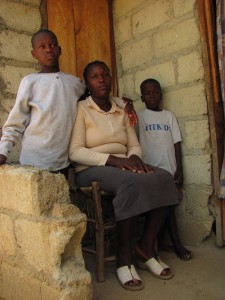 Mona was forced to survive on nothing but a little bread and sugar water for three days, until her father rescued her and her two sons and brought them to the rural village of Kobonal.

“Even if we lost our husband and father, I have to believe that God will provide,” Mona says. “He has put somebody else in his place: the Kobonal mission. That’s all the proof I need that God knows I’m here and suffering, and he’s meeting my needs.”

Click here to learn how Cross International Catholic Outreach is helping the Kobonal mission provide sturdy new houses for the poorest of the poor in Haiti.