Christmas in January…and the Old Testament

For Catholics, the Christmas season doesn’t end until January 6, known as the Feast of the Epiphany. The holiday commemorates the Wise Men who visited the baby Jesus some time after his birth.

Because the Bible says very little about the Wise Men, many questions remain about who they were and why they were expecting the Messiah. Why would men “from the East” be interested in a child born among the Jews?

One fascinating possibility links the Wise Men with a hero of the Old Testament – Daniel. As the Bible explains, Daniel was taken to Babylon from Jerusalem as a spoil of war. While there, he influenced King Nebuchadnezzar through his piety and eventually became the leader of all the astrologers and magicians. Although we think of magicians as illusionists and performers, the original word used in the Bible is more accurately translated as Magi or Wise Man. 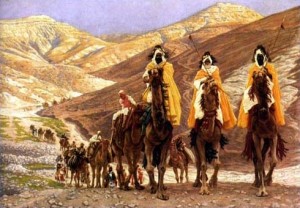 Three Kings’ Day commemorates the Wise Men from the East who visited the baby Jesus.

After Medo-Persian forces conquered the Babylonian Empire, Daniel remained in his leadership role, continuing to influence the next generation of Magi there in the East.

As a faithful Jew, Daniel would have been familiar with the teachings of his Jewish predecessors – prophets such as Isaiah, who spoke about the coming Messiah. Isn’t it likely that Daniel shared these stories with the Magi who served under him? If he did, that would have given them every reason to anticipate and want to seek out the Messiah themselves.

Through Daniel, God may have laid the groundwork hundreds of years in advance for the Wise Men to travel to Bethlehem and welcome the incarnate Christ!

Such demonstrations of God’s sovereignty should be an encouragement to all believers. They reveal that our Lord is working out his perfect plan through all of history. By remaining faithful to him and championing his teachings, we, like Daniel, may be serving an important role in the lives of others – or even in the ultimate destiny of mankind.