An enduring voice for the poor

Don’t forget to wish a happy birthday to Charles Dickens, who turns 199 next Monday – but doesn’t look a day over 40!

You may remember the British novelist as one of those “dead white males” you were forced to read in high school, but hopefully you paid attention, because his voice still strikes a relevant chord on issues of poverty, greed, and charity.

If you’ve ever accused a particularly stingy person of being a “Scrooge,” you can thank Dickens for creating that iconic personification of greed in his 1843 classic, A Christmas Carol. If you’ve ever said, “Please, sir, I want some more,” in a British accent while standing in the cafeteria line, you can also thank Dickens for Oliver Twist, the story of a poor orphan boy forced into child labor and lost in London’s seedy criminal underbelly. 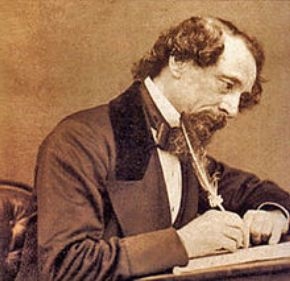 The writer’s shocking depictions of contemporary poverty awakened his middle-class readers to the rampant social ills that had gone largely unseen. His work eventually led to the clearing of Jacob’s Island, the real London slum that was the basis of Oliver Twist.

A lot has changed in the world since Dickens’ death from a stroke in 1870, but poverty remains. And like the people of Victorian England, each of us has a choice whether to shelter ourselves from the cruelties outside our door or confront those needs and do something about it. When you read about families eating “mud cookies” in Haiti, children scavenging through garbage dumps in South America, or young mothers dying of AIDS in Africa, these aren’t just stories in a book – they are real-life tragedies that are happening to real people right now.

Orphan exploitation may no longer be a British epidemic; but in the countries where Cross Catholic operates, it is common to find children who have dropped out of school so they can work to feed their families. Some beg on the streets, some collect recyclables from the dump, some are illegally employed in slaughterhouses at very little pay. In extreme cases, children are lured into lives of virtual slavery by international sex traffickers.

But with God’s help, there is always hope. Here is a list of projects Cross Catholic is currently sponsoring to improve the lives of orphans and vulnerable children around the world. They need food, shelter, medicine, education, and most of all, the love of Christ.