A Look at Lent

Yesterday was Ash Wednesday, the first day of the Lenten season. For Catholics around the world, Ash Wednesday marks the beginning of 40 days of earnest prayer, sincere self-reflection, and an intense focus on Christ.

Why do we do this? Lent itself isn’t a ritual detailed in the Bible. Yet it has become a cherished custom. Some suggest its origins stem from the practice of repentance and mourning in ashes as found in 2 Samuel 13:19; Esther 4:1; Job 2:8; Daniel 9:3; and Matthew 11:21.

A more widely-accepted view points to the 40 days and 40 nights Jesus spent in the wilderness, fasting and praying, as described in Matthew 4:1-11. There, the devil came to Jesus, tempting him to turn stones into bread to satisfy his hunger or to throw himself from the temple in order to prove that angels would save him. The devil offered all the kingdoms of the world if he would worship Satan, but Jesus wisely refused each temptation. 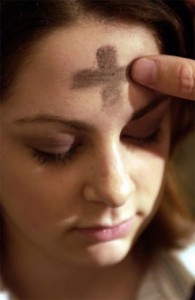 While one part of Lent involves preparing our hearts and minds for Christ’s death and resurrection, another large part involves an individual refocusing on and imitation of Christ. As Catholics, we’re also called to refuse earthly temptations (sin) just like Christ did. We can’t be perfect—but we can tune our hearts to God’s wishes and Christ’s example. We can take a serious look at our lives and pinpoint where we might be a better follower of Christ and God’s word.

In all of the seriousness that goes with Lent—and indeed it should be treated with seriousness—we might forget that Lent can be a joyous time as well. As we prepare ourselves and our hearts for Christ’s death on the cross, we should also prepare ourselves for the joy that follows upon his resurrection. After all, Jesus’ ultimate purpose of suffering death on a cross was to redeem us, his flock. And that should bring us the greatest joy we can feel on this earth.

After the torture of the cross and the journey into hell, Jesus returned to his disciples. This appearance wasn’t last-minute, nor was it inconsequential. Those appearances after his resurrection solidified the promise he had made: that through his death, our sins were forgiven. What a joyous moment!

That joy continues. Each of us has reason to celebrate the salvation that Christ brought to us, and we can celebrate it during Lent and the whole year through. So this Lenten season, remember that in addition to preparing for Christ’s sacrifice and focusing our heart on him, we can also rejoice in the forgiveness we’ve been granted.