Last week marked International Women’s Day, a global celebration of women and their contributions to society. This year’s celebration was especially meaningful because it also marked the holiday’s 100th anniversary.

As hundreds of media outlets around the world took stalk of the impressive social, economic, and political achievements by and for women since 1911, many came to the same conclusion: Much has been accomplished, but many inequalities remain.

These inequalities are especially pronounced in developing countries — and studies have shown that it’s crippling their ability to break the cycle of dire poverty. Women often hold the greatest potential to lift their families and villages from poverty. Sadly, in most developing countries women are systematically denied opportunities to better themselves and, in turn, their families. 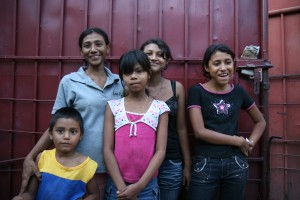 Maria Hernandez, a widow and mother of four, joined a Cross Catholic-sponsored microenterprise program that not only changed her family’s life but also helped change her impoverished Nicaraguan community.

That’s why at Cross International Catholic Outreach we partner with Catholic ministries that are working hard to help improve the lives of women and girls around the globe. Cross Catholic offers prenatal and medical care to mothers, scholarships and school lunches to disadvantaged girls, income-generation training and housing to single mothers, and opportunities to girls in danger of falling into human trafficking. These are just a few of the many ways Cross Catholic is bettering the lives of women, girls, and ultimately entire communities in the developing world.

We have seen the impact these programs make, so we know they work. And the ripple effects are amazing. Take the story of Maria Hernandez, a widow and mother of four. She struggled to make a living working in a filthy city garbage dump in Managua, Nicaragua. The work was hard and dangerous, but it was all she could do to keep her family fed since she was never able to attend school. Maria and her children lived in a shanty next to the dump that they had cobbled together from scraps of garbage.

After Maria’s mother died from breathing the dump’s toxic fumes every day, Maria knew she had to get her family out of there. A Catholic missionary told her about an income-generation program for women being supported by Cross Catholic. Maria began making beaded jewelry with the group, and she was so good at it that she became one of the project coordinators. Now she and her daughters work at the program and make enough to support the family without working the dump. Maria was also able to move her family out of the dump and send all of her children to school with the money she earned. And she not only helped her own family, but she also began going into the community to tell other women to join the group and leave their work in the dump behind.

This is just one example of how helping just one woman succeed can improve a whole community. Click here to learn more about our work to help disadvantaged women and girls around the world.