In case you haven’t already noticed, prices at the grocery store have been going up in the last few months.

Food prices worldwide are on the rise this year for a number of reasons, including natural disasters in Russia, Argentina, and Australia, droughts in China, and sky-rocketing oil prices resulting from recent conflicts in the Middle East and North Africa.

It’s not fun to pay extra for staples like bread and milk. But picture for a second what would happen in your income was less than $2 per day—and then food prices starting rising.

The increase would be more than annoying. It would be devastating!

In total, 2.7 billion people struggle to survive on less than $2 per day. Poverty in the developing world, however, goes far beyond income poverty. It can mean having to walk more than a mile everyday simply to collect water and firewood. It can mean suffering diseases that were eradicated from rich countries decades ago. It can mean never making it past the primary grade levels in school. 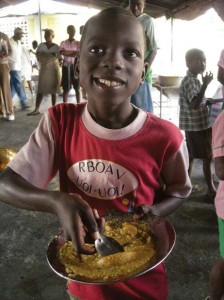 We are responding and acting in Christ’s name. Won’t you join us?

In the face of that kind of deep and wide-ranging poverty, increasing food prices add to an already long list of daily struggles for the poor.

The words of Proverbs 3:27 say, “Do not withhold good from those who deserve it, when it is in your power to act.” When we see 2.7 billion people living on a few dollars a day, the Bible asks us as Catholics to respond. When we see rising food prices making it painfully difficult for the poor to buy food, let alone nutrient-rich food to help them stay healthy, the Bible tells us to act.

Cross International Catholic Outreach IS responding and acting…and we invite Catholics like you to join us! Click here to read about the many Catholic ministries we support worldwide with help from our generous benefactors, and how we’re helping them serve the poor through food, shelter, medical care, water, education, self-help programs, care for orphans, and emergency relief.