“Tet Kale” is a Creole phrase with a double meaning: “shaved head” and “all the way.” But as the campaign slogan of Michel “Sweet Micky” Martelly, Haiti’s president-elect, it also implies a third meaning – change.

A preliminary vote count this week handed Martelly a clear 68 percent majority, setting him on course to become the next leader of the poorest nation in the Western Hemisphere. It is a peaceful end to a tumultuous election season, but for Martelly the hard work is just beginning. Our prayers go out to our Haitian ministry partners, as they wait to see what the new leadership means for them and the communities they serve.

Martelly is promising change – a welcome idea to the masses of impoverished Haitians still recovering from the 2010 earthquake. His status as a political outsider and former Carnival entertainer makes this feel like a fresh start, but observers are unsure what kind of start an inexperienced newcomer will bring. We can only hope and pray that God will give him the wisdom to lead Haiti in a positive direction, out of poverty and corruption and toward growth and prosperity. 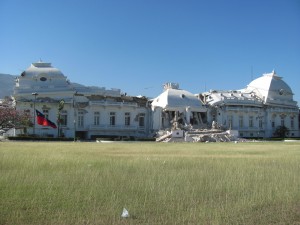 In January 2010, the Haiti earthquake destroyed the Presidential Palace. The election of a new president, Michel Martelly, marks a fresh start in the road to national recovery.

Whatever happens, we know Haiti’s future is in God’s hands. God can take Haiti “all the way” into the change they so desperately need. As the Bible says in Psalm 20:7, “Some trust in chariots and some in horses, but we trust in the name of the LORD our God.” That’s why we begin each workday at Cross Catholic in prayer, relying on Christ’s mercy to bring food to hungry Haitian children, shelter to homeless Haitian families, and love to the marginalized.