Vision from the slums

“Where there is no vision, the people perish.”

The famous KJV translation of Proverbs 29:18 may invoke nausea as often as inspiration, because so many leaders misapply it to promote their personal agendas.

But as I search for godly wisdom to make sense of my recent visit to the slums of Peru, the first verse to come to mind – rightly or wrongly – is Proverbs 29:18.

The vision from a dry, rocky hillside on the outskirts of Lima city was far from inspirational: a cluster of 150 slums, spreading as far as I could see across a barren desert landscape, filled with pig sties, crumbling shanties, and the omnipresent dust that chokes the lungs and scrapes the eyes. Flimsy utility poles carry electricity to tiny television sets that give the poor an escape from their purgatory-on-earth – but they have nothing else. No water. No sewage. No kitchens or bathrooms – at least not that an American visitor would recognize as such. No fans to get cool under the blazing midday sun. No refrigerators – or much food to put in them. 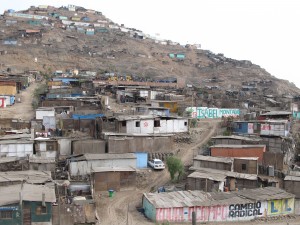 A slum in Peru

How, you have to wonder, will the children of the poor ever escape the cycle of poverty, if poverty is all they can see? How will they survive if all their hopes of future success are in downtown Lima, a faint skyline of right angles that, as far as they know, might be a city or just an unusually shaped cloud hovering in the distance? Will they perish for lack of vision?

Ugliness of landscape may be a superficial way to judge poverty. But the ugliness I remember the most is the human ugliness of the abuse endured by children. I think of Paola, a 9-year-old girl who brought her younger siblings to a school lunch program – carrying a baby in her arm and holding the hand of a toddler in the other – because her father had abandoned them and her mother was ignoring their needs. I think of the scared little boy who would wet his bed while his parents fought at night, and the child whose mother burned his hand in a fire because he ate a second helping of chicken. Not all of Peru’s poor are bad parents; many love and adore their children. But to the extent that there appeared to be a pattern of abuse, I found myself asking why.

As it turns out, the answer can be found in Proverbs 29:18. The ESV Bible version gives a reading closer to the intent of the original language, “Where there is no prophetic vision the people cast off restraint, but blessed is he who keeps the law.”

“Vision” isn’t just what we see. It’s the voice of God, directing our hearts and minds and making our paths straight. Without God to guide us, each one of us would “cast off restraint” and become lost, wicked, and cruel. That’s why the poor need more than a cup of cold water. They, as much as all of us, need an encounter with Jesus Christ.

At Santa Maria de Huachipa, a Cross Catholic-sponsored school in a poor Peruvian town, a young student posed for my camera under a statue of the ascending Christ. He placed his hand on the wounded feet as if to say, “Take me with you to heaven.” Nearby, children flocked around Fr. Garin, the elderly priest who runs the school, and smothered him with hugs and smiles. I realized I’d come to a place where children are receiving a vision of hope and life, rather than hatred and despair. They still saw the poverty before their eyes, because it hadn’t gone away; but I knew that as long as their hearts were turned to Christ, they could envision the paradise beyond, and they could live as if they were walking on streets of gold. 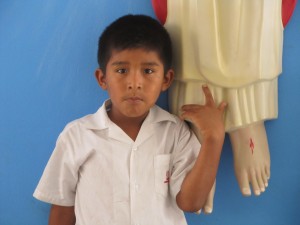 A student from one of our projects in Peru