A Big Impact for the Poor

When Sister Irene Duval of the Compassionate Franciscan Sisters of the Poor first arrived in the village of Viloux, Haiti, she wanted to serve children—but she couldn’t exactly figure out how, until she discovered a need she could meet with support from Cross Catholic.

“When I came here, it was a quiet little town and there weren’t too many kids,” Sr. Irene told us. “I didn’t think anyone needed my help because there were no kids that were on the street. Almost everywhere you go there are kids in the street, and there was no such thing here because every kid has a family. Isn’t that perfect? That’s what we aim for in our lives—I know I do. So I said, ‘What can I offer these kids?’ Then I found out these kids went to school without food.”

That’s where Cross Catholic came in to help. The children’s parents were too poor to send a lunch with them to school, meaning they went hours without food. No peanut butter and jelly sandwiches, no chocolate pudding cups, and no juice boxes, things kids in the United States would likely see in their lunchboxes. In fact, the students were lucky if they received anything to eat at home for breakfast or supper—many of their parents were simply that poor. 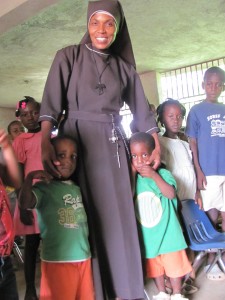 In addition to going hungry, the local public school routinely turned children away if they couldn’t afford the fees, uniforms, and school supplies needed to attend. A vicious cycle started up: because children weren’t paying the fees, there was no money to pay the teachers’ salaries, so the school dropped from four to two teachers. When the number of teachers declined, the number of students in the classrooms was forced to decline as well.

With support from Cross Catholic, Sister Irene was able to fund the teachers’ salaries, pay for the fees for the children, and start a feeding program at the school. Now students from villages all around come to eat a nutritious lunch and attend the public school in Viloux. Because of help from Cross Catholic, Sr. Irene found a way to make a big impact among poor children, all in Christ’s name!