It’s always amazing to me when I see evidence of how Cross Catholic-supported ministries are having a positive impact on people’s lives all around the world. Seeing that impact firsthand in the field is a blessing, a blessing I want to share with you through the story of a young man I met in Mozambique.

Hassane, 22, is a living success story for Reencontro, a Cross Catholic-sponsored ministry serving orphaned and vulnerable children in Mozambique. Hassane’s father abandoned the family when he was very young, and his mother died in 2004, leaving him to take care of his five younger siblings—at only 16 years old!

Hassane said he remembers feeling scared after his mother passed away. He didn’t know how he would buy food or clothing for his siblings, let alone pay for their schooling. The last thing his mother said to him was that he must watch out for his younger siblings, give them an education, and teach them to live morally. But how could he do that, when all they had was a tiny reed hut that leaked when it rained and was on the verge of falling over—and no way to support themselves except by begging in the streets? 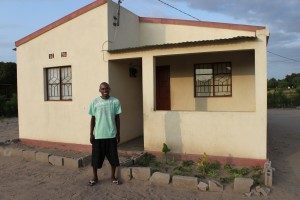 Support from Cross Catholic helped Hassane and his family continue their education, stay healthy, and live in a safe shelter after they became orphans.

Cross Catholic’s long-time ministry partner, Reencontro, discovered Hassane and his siblings and began providing much-needed food, medical care, educational support so they could attend school, and spiritual counseling. He said even though he doesn’t have a real mother, he feels like Beatriz, the loving Reencontro volunteer who visits the family regularly, is just like a mother to him. In 2008, Reencontro was able to give the family the most transformative gift of all because of help from Cross Catholic—a new house.

Today Hassane is a highly-qualified school teacher in his local village, fulfilling his dream of helping other poor children become educated. One of his brothers is attending medical school in Mozambique’s capital city, and all of his other siblings are attending school regularly as well.
Hassane asked me to deliver this message to the American Catholic that provided support for Reencontro through Cross Catholic: “It’s a big thing to give to someone across the ocean and far away, a person you have never seen. But people with good hearts have shown kindness to this family. Thank you.”