Having grown up on a ranch, I always keep an eye out for agriculture-related things while traveling. I think it’s amazing how God has given us the know-how to feed ourselves and that he’s tasked us with taking care of his beautiful creation and its creatures. I’ve seen a lot of fields with many different crops before, but I’ll never forget the first time I saw a field of pineapples.

It was in Mozambique, on a long drive from the town of Xai-Xai to the capital city of Maputo. I’d finished a full day of interviews and it was evening. The people I was traveling with, the women of a Catholic lay ministry for orphans called Reencontro, pulled over to show me a piece of land that had been bequeathed to them by a generous Catholic woman.

Reencontro hopes to one day develop the land into a school for poor children, but for now they’re renting it to a farmer who’s growing pineapples and other crops on it. Yes, the pineapples were cool, but it was something else I saw at that stop that made this moment a memory.

Not far away, four young boys were sitting in the sandy dirt. They were dressed in rags and their hands and feet were covered in silt. Each boy had a collection of empty soda cans in front of him that he’d gathered from the road ditch. As you can see in the photo, they had built little “carts” out of wire that they used to transport the cans. 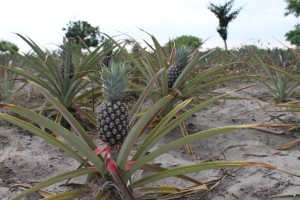 Reencontro hopes to one day develop this land into a school for poor children, but for now they’re renting it to a farmer who’s growing pineapples. 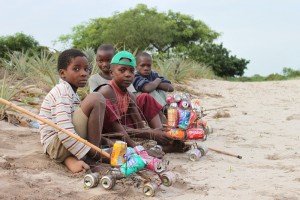 These boys weren’t out collecting cans for fun—they were doing it because they needed to make a little money, probably to help feed their families and themselves.

I know those boys weren’t out collecting cans for fun—they were doing it because they needed to make a little money, probably to help feed their families and themselves. That’s what children are often forced to do in Mozambique. Many of them have to work odd jobs, like selling cans, so they have enough money to buy food.

Thankfully, I knew those boys were exactly the kind of at-risk children Cross Catholic and our partner ministries are seeking out and helping in Mozambique. Reencontro serves orphaned and vulnerable children, providing them with food, education, health care, and houses. We’re trying to make the sight of working children a thing of the past, and instead enjoy the sight of young disciples for Christ living successful lives.

Whenever I see a pineapple, I pause for a moment and remember the gritty dirt of the field, recall the fruit’s sweet smell, and think of those children I met. I’d like to stop by a Mozambique pineapple field again someday, but I hope that when I do, I won’t see any more working children like those young boys.