Yesterday morning, Cross Catholic staff listened as International Projects Officer Tara McKinney shared photos and stories from the recent vision trip she led to Mozambique. One of her co-travelers, Cross Catholic staff member Maria Aleman, joined her in person while the other, Monsignor Lambert Luna from St. Joseph on the Rio Grande Catholic Church, joined us over the phone.

Tara, Maria, and Monsignor Luna visited one of my favorite projects for orphaned and vulnerable children that Cross Catholic supports with help from our generous friends, a ministry called Reencontro.

Side note: St. Joseph on the Rio Grande in New Mexico has supported Reencontro through Cross Catholic for many years, so we invited Monsignor Luna to join us in Mozambique to see how his parish’s gifts were being put to work in Christ’s name. 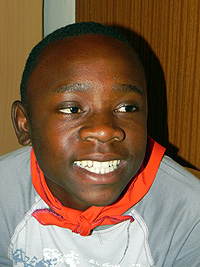 Miguel wants to work for a non-profit to help the poor.

They shared a story that really touched my heart about a teenage boy named Miguel, 15, who lost both of his parents to AIDS. He has an older sister who’s also HIV positive and a younger brother. Due to his sister’s health and his brother’s young age, Miguel quickly became the head of household.

The house their parents left to them began falling apart and the children had no money to fix it. Since it was made only of reeds, it began to develop holes and the roof collapsed. Soon the children could barely afford to eat each day…

The caring staff of Reencontro discovered Miguel and his siblings and immediately enrolled them in their program for orphaned children. They received food, medical care when needed, and help paying for school uniforms and fees. Later, they received a new house to replace the one that was falling down! With help from Cross Catholic, Reencontro staff had the resources to save Miguel and his family.

The travelers told us Miguel wants to continue school and someday work for a non-profit to help the poor, just as Reencontro helped him and his family. It’s stories like Miguel’s that make me enjoy coming to Cross Catholic each day and working hard for the good of the poor!

Here are a few other highlights from the vision trip. Enjoy! 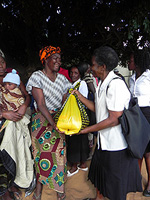