Cross Catholic President Jim Cavnar recently traveled to Croix-de-Bouquets, Haiti, where he met with Monsignor Jean Pierre of the Archdiocese of Miami to have a look at the ongoing construction of a new Cross Catholic-supported health clinic.

An earthquake-proof security wall and seven-room guesthouse are already finished, and construction crews are now laying cement blocks for the foundation of the Pierre Toussaint Catholic Center.

Msgr. Pierre, who is managing the project, told us he was “bitten by the Haitian bug” when the 2010 earthquake struck, and he has been traveling to Haiti regularly ever since. Though more than a year and a half has passed since the devastating quake, the need is still great.

“We still have a lot of people who need therapy, especially physical therapy and emotional therapy,” he says. “We are thinking about doing prevention here also, water treatment and teaching people how to take care of themselves and prevent disease… 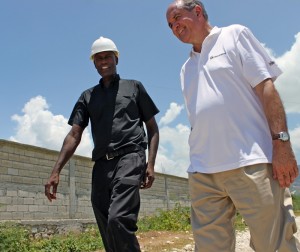 The idea of this place is like a foothold, because in Haiti there is always an emergency. If it’s not the earthquake, it’s the hurricane. If it’s not the hurricane, it’s hunger, famine – and we have cholera. That’s why we have a place we can come and be safe, and at the same time also we can work for the poor.”

Msgr. Pierre says that two major problems – the high cost of materials and transportation – have been solved because of our help. Cross Catholic shipped seven containers of building materials and is planning to send more as the construction process continues.

Please pray with us that the clinic will soon be finished and opened to the public, so the sick and suffering can find relief.