Bodies and Souls Transformed in Christ

But He answered and said, “It is written, ‘Man shall not live by bread alone, but by every word that proceeds from the mouth of God.’” – Matthew 4:4

This well-known verse reminds me of the story of a Honduran girl named Nissi and her mother, Elba. Nissi, a one-year-old girl who lived with her parents in a very poor rural community, suffered from a severe case of club foot that affected both of her feet. Elba tried to get Nissi the care she needed, but they were too poor to afford it.

Soon Elba discovered a Cross Catholic-supported hospital where her daughter could receive castings to correct her club feet for free. She faithfully brought Nissi to the hospital for the castings, but something else besides her daughter’s feet was changing for the better.

Noticing how troubled Elba seemed, the spiritual director at the hospital began ministering to her. Elba talked about her many problems, such as having three children in school and being unable to afford the necessary uniforms and materials. She was struggling and hopeless, thinking there was no one to help her. 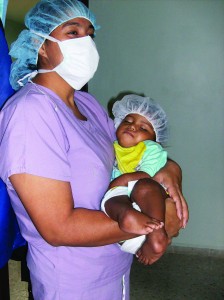 Before: Nissi’s feet were once severely twisted and caused her pain.

The conversations began turning toward Christ and his message of peace and hope. Finally, Elba opened her heart to Jesus and accepted him as her personal Lord and Savior as the hospital worked to fully heal her daughter’s club foot — two amazing transformations in one family!

Stories like this illustrate why it’s so important for Cross Catholic to choose Catholic ministries to support as they help the poor. They minister to the body and soul as Jesus himself would have done. While it’s vital for our ministry partners to provide care and healing for children like Nissi, it’s also important for them to focus on Catholic evangelization and help families spiritually. Our partners provide both the “bread” and the word of God—and no one can live without both! 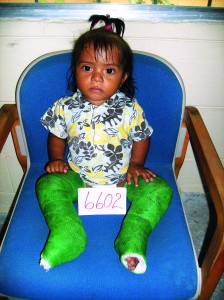 After: Doctors corrected Nissi’s condition in both feet — praise God!