When I first shake hands with sisters Mary and Jhovana, they appear much like average college students. They carry book bags and talk about their classes, and they are both about to graduate and head into the workforce armed with their degrees. Their quick smiles reveal their justified excitement.

But here’s what makes them different: they live in a rural farming community high in the mountains outside Corocio, Bolivia. Most students in these types of remote areas—in Bolivia and other developing countries—have to travel far away to attend college. Of course, that’s expensive and most of their poor families don’t have the money to send them, so they never receive a higher education or the good jobs that come with it. 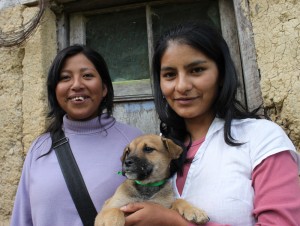 For Mary and Jhovana, however, Carmen Pampa University is just a five-minute walk away. The university is a perfect example of how the Catholic Church routinely seeks out rural, untouched areas and begins doing God’s work among otherwise forgotten people.

Carmen Pampa is a Catholic university founded in 1993 by Sister Mary Damon Nolan of the Franciscan Sisters. The college offers five majors: veterinary science, agronomy, nursing, education, and ecotourism.  The majority of people living in the area served by the college are native people, Aymara Indians and Quechua Indians, the poorest segment of Bolivians.

Cross Catholic and our generous benefactors support three student food cooperatives that provide a free breakfast to all students and reduced-cost lunches and dinners to co-op members. Before the food co-ops were started, students were actually fainting from hunger in their classes—their families were so poor that they couldn’t afford to pay tuition and buy enough to eat.

And the surrounding neighborhood? It’s very rural and isolated. We visited one family that lives more than a 30-minute walk through the forest away from Carmen Pampa—and that was one of the closer houses we could visit! Most families rely on subsistence farming to survive. This is the kind of community that desperately needs higher education, and thanks to Carmen Pampa many students are becoming the first in their family to ever attend college.

After graduation, a majority of the students return to their local communities and begin working, said Hugh Smeltekop, vice director general. “A lot of them have gone back to their communities, work on their farms, and start small projects that benefit their families,” Hugh said. “They help their community members with advice and workshops and things.”

In addition to being community leaders, students like Mary and Jhovana are becoming spiritual leaders as well. “There’s a really strong sense of spirituality in the sense that you become one with Christ and one with your world and one with your people—that kind of solidarity and unity that Christ calls us all to, I think, is really where a lot of our students come from,” Hugh said.

Here’s to students like Mary and Jhovana becoming spiritual and community leaders for Christ’s kingdom in Bolivia!