It’s not a good sign when the community you live in is called Laroche, or “The Rocks.”

The Haitian community of Laroche outside of Les Cayes can be difficult to access because of—you guessed it—the rocks that permeate the terrain. While driving to visit several families who received a new home through our ministry partner Pwoje Espwa, we eventually had to stop the car because the road became too difficult to traverse. Luckily I had my walking shoes on!

I met a sweet elderly woman whose life is as tough as the rocks that surrounded us. Virginie, 68, lives with her handicapped son, Gerald, 52. The two of them used to live in a dilapidated mud and stick house that leaked badly when it rained. Thanks to Cross Catholic and our generous benefactors, they have a sturdy new concrete house to call their own.

I learned Gerald is probably suffering from the after-effects of a stroke. He is mute and can’t use his right leg or right arm, and Virginie has become his only caretaker. Only a year and two months ago he was struck with this condition—before that he was a healthy, normal man. I immediately added Gerald to my mental list of people to pray for! 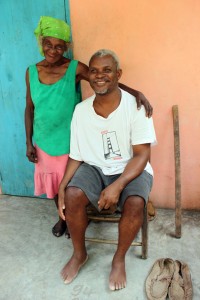 God’s providence led Pwoje Espwa to Virginie and Gerald. He knew they desperately needed a new home, especially after what happened to Gerald. It was clear God delivered on his promise to always meet our needs for this family.

Virginie said the new house has greatly changed her life. As an expression of thanks, she has taken to praying for everyone she encounters. “I couldn’t live there anymore. The roof leaked, water seeped in. I’m just so happy that all I do is pray!” Virginie said.

Of course, God is our rock of salvation in times of need as well as times of plenty. In the community of “The Rocks” that day, this metaphor for God’s everlasting love couldn’t have been more fitting. I’m thankful I was able to visit “The Rocks” to see the eternal rock at work!