When I visited Haiti last month, I sat down with a woman whose experience during the January 12, 2010 earthquake I absolutely must share. Though the earthquake was almost two years ago, the scars are still fresh in the minds of most Haitians—and their testimonies continue to be powerful reminders of God’s love for his people.

Mary, 42, will forever bear the physical proof of the quake. During the earthquake, she was staying at her brother’s house in Delmas 4 in Port-au-Prince. She used to travel back and forth from her and her husband’s house in rural Les Cayes to Port-au-Prince, where she would sell small items in the market.

She was sitting on the porch and decided to enter the house moments before the earthquake. The house fell completely when the earthquake hit. There were six people in the house at that moment and Mary was the only survivor—her brother and her nieces and nephews died. Worse yet, her 5-year-old daughter died as well. 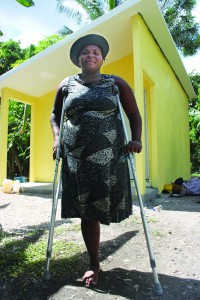 Mary, 42, will forever bear the physical proof of the quake.

Mary was trapped under the rubble for eight days, with debris crushing her leg. “I had a big feeling of hopelessness. I was thinking of death, not life. But I knew God was with me,” she said.

A neighborhood Haitian search party eventually found her and took her to the general hospital. Sadly, Mary’s leg eventually had to be amputated at the knee. After her month-long stay in the hospital, she returned to her house in rural Les Cayes.

Meanwhile, Mary’s family had heard that her brother and his family had died in the earthquake, and they assumed Mary had died as well. They heard no news about her after the quake and during her stay at the hospital. When she walked up to the house she shares with her husband Sorrell, all of her children were there, including several from Port-au-Prince. “They thought for months that I was dead. The first time we made contact was here, when I came home,” she said.

Though reunited, they family still had a huge problem. The house Mary and her husband were living in was in terrible shape. Water came in when it rained because the roof leaked. The dirt floor turned to mud because of the water. “It was dilapidated. There was a wall falling in,” she said.

God led our ministry partner in the area, Pwoje Espwa, to discover Mary, Sorrell, and their 13-year-old son living in the shoddy house. Construction of a brand new house was completed in October 2011, thanks to the generous Catholics who helped Cross Catholic support homebuilding for earthquake survivors in need of housing. Mary says she couldn’t be more grateful. “It’s been a great change for my life. I was living in a bad house, but I didn’t have a choice. God was able to give me this new one,” Mary said.

Sitting with Mary, it was amazing to see that her story had a happy ending. Praise God for his continued provision for families impacted by Haiti’s earthquake!