January 12, 2010 began like any other day in Haiti. There was nothing remarkable about it at first. Children went to school, parents went to work, shoppers filled the marketplace, and the colorful Haitian buses, called tap-taps, buzzed through the streets of Port-au-Prince.

It was just a regular Tuesday — until the unthinkable happened.

Without warning, a massive 7.0-magnitude earthquake shook the earth violently; buildings swayed and toppled into piles of rubble; cars flew into the air and collided with one another; the Presidential Palace and National Cathedral crumbled. In about 45 seconds, more than 220,000 innocent people were crushed to death, about 300,000 were injured, and 1.5 million who once had a home and belongings suddenly had nothing to call their own but pain and grief.

It’s hard not to wonder why such a terrible tragedy happened to Haiti’s people. But that’s where we need to stop and look to the gospel for answers. Consider this passage: “I have told you these things, so that in me you may have peace. In this world you will have trouble. But take heart! I have overcome the world.” – John 16:33. 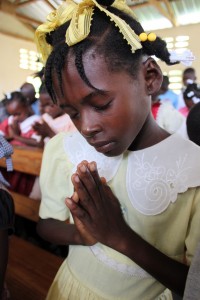 God is present with us always, both in tragedy and in triumph. He doesn’t cause suffering; instead, he overcomes it. Even on the dark day of January 12, 2010, he was there in Haiti, comforting his people and holding them close.

If I close my eyes, I can see Jesus laying there with the children under the rubble, wrapping his arms around them and protecting them. I can also see him carrying souls away to heaven and bringing his believers to the golden streets.

Please join me in a prayer for Haiti’s people as we remember what happened two years ago today.
Father, because of your son we can enjoy peace in a world marked with tragedy. Because of you we can offer comfort to the world, even if they don’t yet know you. Because of your love, we can rest secure in your arms, even in the midst of suffering. On Good Friday, you suffered the ultimate tragedy, giving up your only son, because you love us. Thank you, Lord, for suffering tragedy for us and with us. We pray these things in Christ’s victorious name. Amen.