The baby in this photo was the first child to be born at the new St. Raphael maternity ward in Matisi Village, Kenya. Appropriately, his mother chose to name him Raphael!

Cross Catholic funded the construction of the maternity ward because of the urgent need for better care for infants and mothers. Kenya has high infant and maternal mortality rates, and the area where the ward was built is extremely poor. The ward was completed around the beginning of last year, but due to legal issues was delayed from officially opening until October. Since then, with ongoing support from Cross Catholic, the professional medical staff has been saving lives. We met one young woman named Carolyn whose first pregnancy had ended in miscarriage and whose second child would most assuredly have died from being tangled in the umbilical cord if not for the expert care provided by the maternity ward staff.

During the blessing and opening of the maternity ward, a physician assistant spoke about the importance of motherhood: 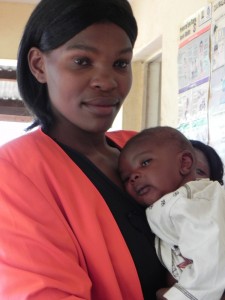 Baby Raphael with his mother

It is a call for a woman to fulfill a longing in her heart and body for children and to come closer to God through love of her children. Many women here in Kenya struggle through trials and tribulations, but so many of them keep on persevering out of love for their children, family, and love of God…So many women – Mother Teresa of Calcutta, Madam Curie of France, Mother Seton of the United States, Kenya’s Nobel Prize winner, Wangari Mathai, and even my own mother who raised ten children – all gave their lives in dedication to mankind and children to alleviate suffering and replace it with love.

So we celebrate today all women and especially pray for the women present today and future women who will bear their children here. May they live in the light of God’s love and comfort and care for their children.