Veronica Kageshi only had two years with her parents before they passed away and left her as an orphan. Her grandmother lovingly took her in, but it’s been a constant struggle to survive because she has no source of income. They live in a dilapidated house made of corrugated tin and food is often scarce.

In a country where half of the population lives below the poverty line, now seven-year-old Veronica could have been another statistic struggling to get by on Kenya’s streets. But thanks to Cross Catholic’s support of Brother Beausang Catholic School, Veronica and 800 other poor students are now receiving a valuable education that will one day lift them out of their poverty.

Generous benefactors of Cross Catholic provide this primary and secondary school with everything from teacher salaries to classroom materials to food. Without this support, the majority of these students would be unable to go to school because their poor families can’t afford to pay tuition fees.

Catholic values are an integral part to the school’s philosophy, and teachers work to impart those values to students to help them become faithful, moral individuals. The school also serves a daily meal—and for many children like Veronica—it is the only meal they eat all day. 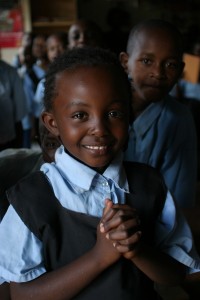 Thanks to our generous supporters, Cross Catholic enables 800 poor Kenyan students to receive a valuable education that will one day lift them out of their poverty.

May God bless those of you who have joined Cross Catholic in bringing education and future hope to Kenya’s poorest children. You have not only blessed these young lives, but have also encouraged their families and caregivers who are working hard to provide.

“Thank you Cross Catholic and your supporters for making it possible for Veronica to attend Brother Beausang School,” said her grandmother. “Now she is able to be in a caring learning environment where daily lunches are making her strong.”