I just received good news from Guyana about a girl we’ve been helping there named Faye. She’d grown up in a really remote area of the country, several days journey from the city of Georgetown where I met her. Her poor single mom had died just two years earlier. At age 20 she was all on her own.

Faye was working really hard to get her nursing degree and escape the abject poverty in which she had been raised, but she had it tough. Distant relatives had let her stay in town with them but started to resent having an extra mouth to feed, so they treated her badly.

Faye had nowhere else to go and no one to turn to for help — until one day she knocked on the door of St. Bernadette’s Hostel. The Carmelite sisters took compassion on her and welcomed her in. Cross Catholic Outreach has been sponsoring her room and board there ever since. Faye told me, “This hostel will be a great memory to me. It’s like a savior to me. I don’t think I will ever forget the hostel.” 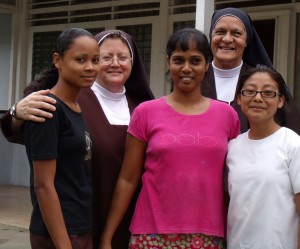 Faye, left, poses with the other young women Cross Catholic Outreach supports at St. Bernadette’s Hostel, and the Carmelite nuns who give them a safe, loving home.

Anyway, I just learned that 23-year-old Faye got married! Since she had no family to help with her wedding, the nuns and girls at St. Bernadette’s turned the hostel dining room into a lovely chapel. Faye was a beautiful bride, surrounded by a loving ‘family.’

Just goes to show how God can use members of his Church to open a door of hope out of seemingly desperate circumstances. Congratulations, Faye! 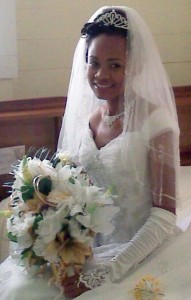 Thanks to the help of her ‘family’ at St. Bernadette’s, Faye had a lovely wedding. Isn’t she a beautiful bride?