When I saw the “before” photos of Marco Antonio and Marco Tulio, I couldn’t believe my eyes.  I’d seen many cute photos from parents celebrating their twins.  This seemed like a nightmarish mirror image of that happy experience.

The twin boys had similar agonized expressions, protruding bones and weak limbs. Their skin was stretched tightly over their thin faces and taut, hungry stomachs. Clearly, they were both about to die of malnutrition.

Marco Antonio and Marco Tulio before receiving care at the emergency nutrition center.

Fortunately, these suffering boys, I learned, had become wards of missionary Carlos Vargas. He operates an emergency nutrition center in a rural mountain area of Guatemala where poor families live in squalor and children often suffer from malnutrition. When he saw the level of need in the area years ago, he immediately began a ministry to help the suffering people.

When I eventually saw the “after” photos of Marco Antonio and Marco Tulio, I was as stunned as I had been by the “before” image. Their faces were bright and healthy! Their bodies were full of life! It was a miracle only God could accomplish, and I believe he did it through his disciples on earth like Carlos and Catholic friends like you. In this case, I saw hope and God’s healing power — doubled! 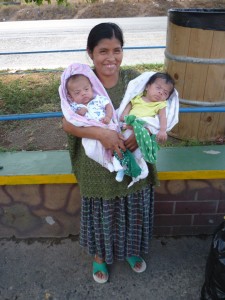 Marco Antonio and Marco Tulio before receiving care at the emergency nutrition center.