Although leprosy may have been nearly eradicated from Filipino society, its stigma remains. Now referred to by its medical name, Hansen’s Disease, it still affects a group of Filipinos, many of whom live in Tala – a location designated as a ‘leper colony’ in the past. Most of the community is now composed of the descendents of those once afflicted by the disease.  Since they are still being impacted by leprosy’s stigma, these families have become the mission field of the Franciscan Missionaries of Mary (FMM).

When 8-year-old Maria enrolled in Lady of the Star Nursery, the FMM’s preschool and kindergarten program in Tala, she had never been to school. Maria was “shy, withdrawn, malnourished and anemic,” according to the director, Sr. Cecilia. Maria also had tuberculosis. Both her mother and stepfather have Hansen’s disease. With her mother earning 50 cents a day scavenging for recyclables and her stepfather earning less than $6 a month as an assistant inside Tala’s Leprosarium, her family was extremely poor. 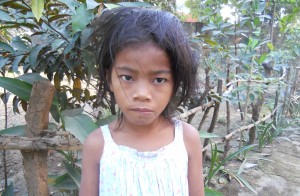 When 8-year-old Maria first enrolled in Lady of the Star Nursery, she was unschooled, malnourished, anemic, and had TB.

At Lady of the Star, Maria was able to participate in the feeding program sponsored by Cross Catholic Outreach and also receive treatments for her TB. “After a few months in the feeding program she gained weight and will complete her TB treatment in March,” Sr. Cecilia said. “Now she has good appetite; she also sings and dances well. She is learning to write and read slowly. Although she is much older than her classmates, she is well-liked, accepted and respected by them; she initiates games and other class activities.”

The Sisters also ‘hired’ Maria’s mother. Instead of scavenging the streets all day in the hopes of finding enough recyclables to buy rice for the day’s meal, her mother now works in the nursery’s garden in exchange for a daily supply of rice.