As I watched the little girl devour the hot meal in front of her, she heaped big spoonfuls of seasoned rice into her little mouth and chewed joyously. She made almost imperceptible “hmmm” sounds as she ate. It was obviously a very enjoyable meal!

Imagine my surprise when I discovered this delicious lunch had arrived in a humble plastic bag. It was a packet of nutritious fortified rice shipped by Cross Catholic Outreach and served by a local Haitian ministry to poor neighborhood children like the little girl I met.

What looks like a simple bag of ordinary rice is actually a ready-to-prepare meal that’s more nutritious than anything these impoverished children would eat at home. I picked up one of the bags and examined it closely. In my hand was almost a day’s worth of vitamins, minerals and protein for a growing child; an important weapon in the battle to combat malnutrition.

Taking one last picture of the girl, I fully understood the heavenly value of humanitarian shipments!

In 2011, Cross Catholic Outreach sent out seagoing containers with more than $119 million dollars worth of goods – including the fortified food packets – to developing countries around the world. Every shipment touched many lives. When I met the little girl whose life was impacted so deeply by our shipments, I felt God’s hand at work. Thanks to all the generous Catholics who help us ship humanitarian aid! 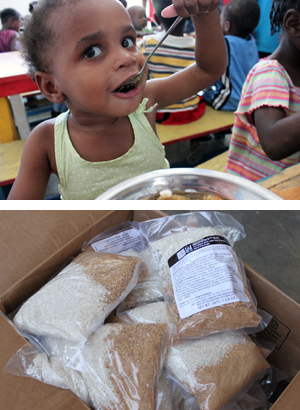