Called to Serve the Poor

When Sr. Irene Claire Duval went to Haiti at the behest of her Mother Superior of the Compassionate Franciscan Sisters of the Poor, she showed up in Viloux – a poor village recommended by the bishop — and basically said, “I’m here! How can I serve you?”

Since then, through support from Cross Catholic Outreach, Sr. Irene has made a significant impact on the education, nutrition, health and welfare of the people of Viloux. And her example has made quite an impression on a few young women there, who aspire to follow in her footsteps. One such postulant is 26-year old Denise, who actually felt called to serve the poor since she was about 15.

“I was walking down the road and saw people who were very, very poor. When I lay down that night I could not stop thinking about them. I began to want to help the poor,” Denise said. It was no surprise to her parents when she announced her desire to join Sr. Irene’s order. “They accepted it because they saw at an early age that this is what would be good for me to do.” Since studying and serving under Sr. Irene, Denise says, “I feel more of God’s presence in my life.” 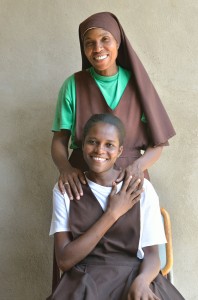 Sr. Irene Claire Duval stands behind Denise, a postulant who has felt called to serve the poor for more than a decade.