Have you ever stopped to think, “What a blessing to live in a country where abstention from meat for a day is a sacrifice rather than the norm!”

Here in the U.S., the modest Lenten requirements can feel painful to our bodies, conditioned as we are to instant gratification of every minor craving. Yet, I’ve traveled to parts of the world where a fish Friday would be considered a luxury rather than a sacrifice, because families are surviving on a diet of corn or cassava. The concept of an Ash Wednesday fast would be incomprehensible to many of the children at the overseas Catholic schools we support, where the free lunch we provide is virtually their sole source of nutrition. Our fasting is their plenty.

To say that starving children are used to having empty bellies doesn’t minimize the seriousness of hunger. On the other hand, one of the benefits of growing up with plenty is that it almost forces us to learn discipline, simply because if we don’t ever say no, we will eat ourselves to death. That’s why we turn away desserts, cut back on sodas, buy diet food and go jogging at sunrise. 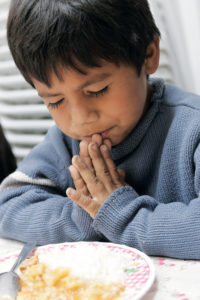 Without sacrifice, the body dies. I think that’s also true of the soul. Christ’s sacrifice gave us life, and now we live that life by being a sacrifice to God and our neighbor. As the Pope said in this year’s Lenten message, “Charity helps us enter into the love of God manifest in Christ, and joins us in a personal and existential way to the total and unconditional self-giving of Jesus to the Father and to his brothers and sisters.”

God has given us so much. What are we doing with it? How much are we willing to sacrifice? How many meals would we forfeit so that someone else might eat? The question is personal and practical and demands of us a concrete response, like the teaching of John the Baptist, “The man with two tunics should share with him who has none, and the one who has food should do the same.”