After seven years as a nurse in the Philippines, Myrna did not feel fulfilled. Something was missing.  She asked the Lord for direction. Should she get married and start a family? Or should she become a nun?  She asked that if God wanted her to become a nun, he would send someone to encourage her.

Then she met Fr. Lung Ho from Jamaica who, during a visit to the Philippines, encouraged Myrna to become a nun. It was the encouragement she had prayed for. She became a Compassionate Franciscan Missionary Sister of the Poor and went to serve at a hospice in Jamaica where the sisters provide care, love and attention to the poor, sick, neglected, elderly and handicapped.

When Sr. Myrna first arrived to her Jamaican assignment, she remembered a vision God gave her. She had dreamt she saw a lush country with many hills and a large white house. In the house she saw elderly people with crutches and wheelchairs.  When she pulled up to the hospice, it looked exactly like the house she had seen in her dream! She knew she was about to fulfill her calling from God! 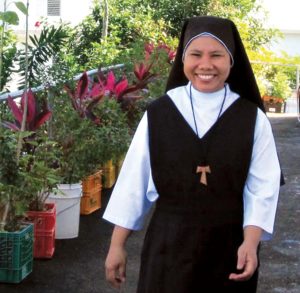 Having provided love and care to the elderly and handicapped for the last decade, Sr. Myrna insists she’s received more from her patients than they’ve received from her.

Shortly after Sr. Myrna started, three patients died in one week.  She was very discouraged; but one of the patients told her, “If you cure, you must endure!”  She has often been very touched by such wisdom from her patients.

One time an emaciated HIV-positive patient shivered a great deal.  Sr. Myrna didn’t know what to do, except to get a blanket, embrace him, and tuck him into bed.  She heard him mumble weakly and thought he was praying for God to relieve him from his suffering. But when the man gained strength and became audible, she realized he was saying, “God, take good care of this sister because she is a stranger and yet she is so kind and loving to me.”  Sister Myrna believes this was God’s way of teaching her the importance of selflessness and putting other’s needs before her own.

Ten years later, Sr. Myrna can see the great impact that working in the hospice has made on her spiritual journey.  Though God has used her as an instrument of His love, she insists she has received much more from her patients than she has given to them; they have even helped her grow spiritually. Sr. Myrna is very grateful to have found her calling!