In the early Fourth Century a physician named Blaise became the Bishop of Sebastea in Armenia, which is now modern day Silvas, Turkey. Not much is known of the life of St. Blaise. “The Acts of St. Blaise” give us a biographical sketch and attribute many healings and miracles to him, both during his life, and through his intercession after his death. But these “Acts” are of medieval origin and are many hundreds of years removed from the historical person.

The reputation of St. Blaise is that many wounded animals would come from the woods of their own volition to the place where Blaise lived. He would tend to their wounds and nurse them back to health.

In the “Acts of St. Blaise” we read of a woman who brought her son to him because he had a fishbone stuck in his throat and was choking. Blaise was moved to pray intensely to God for the child’s well being, and the child was cured of the choking. Hence, the modern Christian tradition of praying to St. Blaise for healing of the throat and all other ailments. 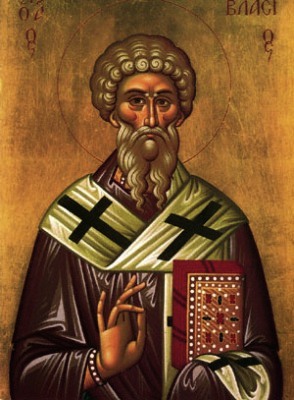 In the Catholic Church two candles are placed along side the throats of the faithful and the intercession of St. Blaise is invoked for good health. This is done on his Feast Day, February 3rd, each year.

Cross Catholic Outreach provides healing for the sick among the poorest of the poor in our world. Medical clinics, hospitals, pre-natal and post-natal home care, and education programs for good health in the developing world are some of the outreach programs we sponsor. Help us heal the sick and improve the health of our brothers and sisters in the developing world with a gift to Cross Catholic Outreach. Visit our website to see the work that we do in helping poorest of the poor. Like St. Blaise you can share the gifts God has given you to heal those who need healing most.