We love supporting programs that lift the poor out of poverty. The theory is: give a man a fishing rod instead of a fish, and he’ll be equipped to feed himself. You’ll have supported real, lasting change.

The logic seems sound, and we have a plethora of anecdotal evidence from our overseas ministry partners to back it up, but what we don’t often see is hard scientific data on the subject (probably because it’s so difficult to gather). But now, scientists are starting to discover what we’ve already known instinctively.

This month, the journal Science published the results of a randomized, controlled trial of an animal husbandry program. Through this study, the researchers tested a charity program the same way they would test a new drug, comparing the group that received aid with a control group that did not receive aid. The test was done in six countries, and the beneficiaries received livestock, training, financial aid, savings accounts and health support. 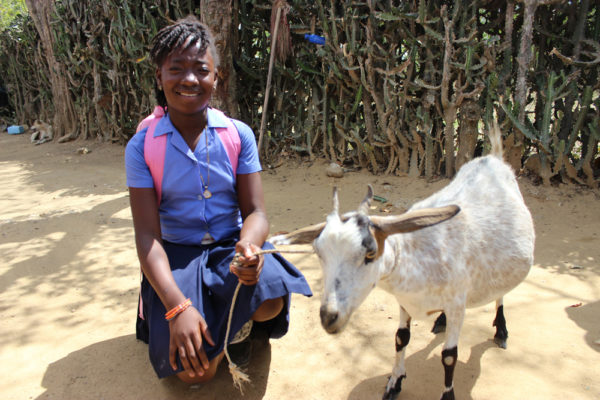 The Kobonal Haiti Mission’s animal husbandry program is one of many Cross Catholic sponsored initiatives helping the poor climb out of poverty.

In their own words: “One year after the end of the intervention…income and revenues were significantly higher in the treatment group in every country.” Families who received aid took a modest step forward out of extreme need. The overall effect was positive, despite a major setback in one country where many animals got sick and died.

This is great news! But as we often point out, finances don’t tell the full story. God doesn’t measure success in terms of material prosperity alone. That’s why Cross Catholic Outreach seeks out projects that nurture the whole person – body, mind and soul. Our anti-poverty efforts, such as the “Farm Animals for the Poor” program in rural Haiti, are an investment that reaps spiritual rewards no scientific study can fully quantify.

Matthew 6:20-21 shows us what true freedom from poverty looks like: “But store up for yourselves treasures in heaven, where moths and vermin do not destroy, and where thieves do not break in and steal. For where your treasure is, there your heart will be also.”